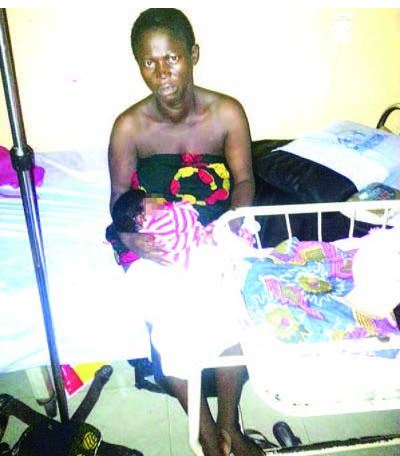 The Director of Tender Care Hospital, Dr Charles Oputa, has denied that his hospital admitted Chinansa, the wife of Pastor Chinedu Rockson.

He said the 42-year-old had diabetes during pregnancy which made him to refer her to a general hospital, adding that he was not aware her womb was removed.

Oputa spoke while faulting the claim of a director of the Ilogbo Central Hospital who had said Chinansa’s labour process was mismanaged at Tender Care where she was first admitted.

PUNCH Metro had reported that Chinansa had developed some complications during childbirth which had led to the removal of her womb and damage to her bladder at the Ilogbo hospital.

Ilogbo Central Hospital, in defence of its action, said Tender Care Hospital, the first hospital where Chinansa was admitted before being rushed down to its facility, had made an attempt to force out the baby which ruptured the womb of the mother of four.

The director of Tender Care Hospital, Oputa, however, said he never touched Chinansa.

He said, “When she came in to labour, I immediately advised her to go to the nearest general hospital and I wrote a referral to the Igando General Hospital. I never attempted anything on her.

“What happened was that she had diabetes during the pregnancy and we advised her to do certain things, which she didn’t do. So, when she came in that Saturday, one of the nurses felt it was something we should operate on. I refused and wrote her a letter to go to the general hospital, where I thought she would have better treatment. I never knew they took her to another private hospital.”

PUNCH Metro learnt that the Ilogbo Central Hospital had already discharged Chinansa and her baby from the hospital.

The pastor said the condition of his wife had worsened, blaming Ilogbo hospital for the situation.

He said, “They had wanted to force my wife out and take her and her baby to the Lagos University Teaching Hospital last Tuesday night, but I told them I was not prepared and they should wait till Wednesday morning.

“Around 4am on Wednesday, I was called that my baby had started stooling. I sent a friend to the hospital to confirm, while I rallied round to raise money. The friend told me my wife and baby had been sent out of the hospital before he could get there.

“As I speak with you, they are both at home and her condition had got worse. She soils her body because of her leaking bladder; we now have to wear diapers for her. I have spent a lot of money and the situation keeps getting worse.”

The director of Ilogbo General Hospital, Dr Femi Obideyi, maintained that Chinansa’s womb had been ruptured before arriving at the hospital.

He said the woman and her baby were referred to a general hospital due to their conditions.

He said, “The woman that was brought to us was bleeding from the uterus and she was in shock. Her womb had been ruptured and if that didn’t happen at their hospital, it is possible she might have been taken to other places. She had obstructed labour before we admitted her.

“It is also not true that we pushed the woman out. Last Tuesday night, we discovered that the baby was stooling and we had to refer the baby to a general hospital the following morning for adequate treatment. That morning also completed the four weeks we gave the mother for recuperation.

“When we called the man, he ignored the calls. We had to report him to the Lagos State Ministry of Women Affairs and Poverty Alleviation, where he had earlier reported us. That was when he sent somebody to pick the wife and the baby.”