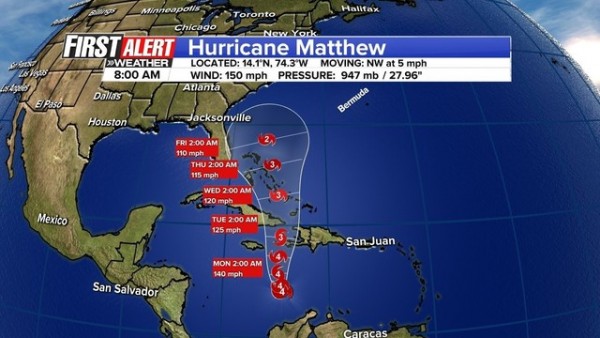 Hurricane Matthew churned across the Caribbean, nearing Haiti with devastating force early Tuesday after claiming its first victims in the impoverished island nation. The most menacing storm in nearly a decade, Matthew buffeted Haiti’s southern coast with strong winds, as rising sea levels caused extensive flooding among the area’s flimsy homes and buildings that have left residents exposed to natural disaster.

The hurricane, which was swirling only 55 kilometers (35 miles) off the coast of the Americas’ most destitute country just before dawn, had already caused flooding in 11 communes overnight, Edgar Celestin, a spokesman for Haiti’s civil protection agency, told AFP.

Due to fierce winds, teams had yet to arrive in the area to assess the number of homes destroyed and other damage. More than 6,400 people had been evacuated to temporary shelters by 0600 GMT across Haiti, officials said. During the day, civil protection forces had struggled with locals who refused to leave some of the most vulnerable areas.

They included the extremely impoverished, densely populated neighborhoods of Cite Soleil — where some 100,000 of the total 500,000 residents face serious flooding risks — and the capital’s Cite L’Eternel by the sea. One sickly woman died Monday evening in the coastal town of Port-Salut when she was unable to leave her house to receive medical care, authorities said. On Friday, a fisherman died after his boat sank in southern Haiti, and another individual went missing in similar circumstances Sunday. In the third city of Cayes, sea water had reached the streets, helped by heavy rains.

“We have already recorded a landslide between Les Cayes and Tiburon” in Haiti’s Sud department, Marie-Alta Jean-Baptiste, director of Haiti’s civil protection told AFP. “In the town of Anglais, the river has flooded the national highway,” she said. Flooding is also being reported in some areas of Jamaica as the Category 4 storm on the five-point Saffir-Simpson scale creeps closer from the south, news reports said. Cuba evacuated some 316,000 people from the east of the island. “No one likes to leave their homes, but the sea is going to rise and that is very dangerous,” said Pedro Gonzalez, a retired chef who had to leave a fishing islet where he lives off the city of Santiago. – Devastating blow – The eye of the hurricane was expected to pass near or over southwestern Haiti within hours, the Miami-based US National Hurricane Center said in its 0900 GMT bulletin. Later in the day it will move near eastern Cuba and near or over part of the southeastern and central Bahamas at night or Wednesday, it said. Haiti, eastern regions of Cuba and many parts of the Bahamas have been placed under a hurricane warning. In Haiti, the alert level has risen to the maximum level of red. Storm swells that could cause life-threatening conditions were forecast off Cuba, Jamaica, Haiti, portions of the Bahamas and the Caribbean coastline of Central America, the NHC said. “This is shaping up to be a devastating blow,” said Domenica Davis, a meteorologist for The Weather Channel. At 0900 GMT, Matthew’s top winds were lashing at 230 kilometers per hour, the US hurricane center said. The storm was creeping northward at 15 kph. Forecasts predict the hurricane will dump 38 to 63 centimeters (15 to 25 inches) of rain over southern Haiti with up to a meter possible in isolated areas.

“Life-threatening flash floods and mudslides are likely from this rainfall in southern and northwestern Haiti, the southwestern Dominican Republic and eastern Cuba,” the NHC warned. – Haiti, Jamaica, Cuba prepare – Thousands are still living in tents in Haiti after the country’s massive earthquake in 2010. Erosion is especially dangerous because of high mountains and lack of trees and bushes in areas where they have been cut for fuel. Workers used heavy machinery to empty canals in central Port-au-Prince that have been blocked by trash for months, although they were unlikely to complete the job in time.

Meanwhile Maarten Boute, CEO of Haiti’s largest cell phone provider, Digicel, said that the company’s antennas were built to resist only a category three hurricane, boding poorly for reception during the storm. “My countrymen, do not be stubborn, do not say ‘God is good’ and will take care of you,” interim president Jocelerme Privert exhorted in an address to the nation. “The dangerous areas will be evacuated,” he added. “We have no interest in risking your lives.”

The poorest country in the Americas is home to almost 11 million people, many living in fragile housing. In Jamaica, officials said the army and military reserves were called up to help deal with hurricane damage.

Buses were also sent to flood-prone areas to move residents to shelters. US embassies in Jamaica and Haiti closed Monday and Tuesday due to the storm. At the US naval base in Guantanamo Bay, Cuba — located along Matthew’s predicted path — officials issued a mandatory evacuation order for all non-essential personnel and family members.

The 61 remaining inmates in the base’s prison are safe, US military officials said. Forecasters predict the hurricane could hit the US East Coast around midweek. Florida and parts of North Carolina have declared states of emergency.