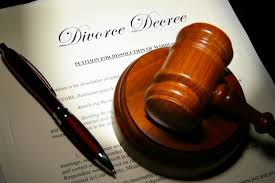 A Mapo Customary Court in Ibadan on Friday dissolved a 22-year-old marriage between Idayat and her husband, Wasiu Adekunbi, for threat to life.

The President of the court, Mr. Henric Agbaje, held that the court decided to put an end to the union between Idayat and Wasiu in the interest of peaceful coexistence.

“Therefore, the union between both of you has ceased to be henceforth.

“Wasiu shall pay a monthly feeding allowance of N3,000 for the upkeep of the child and shall produce them in the court anytime Idayat desires seeing them,” he said.

Idayat explained that Wasiu would soon put an end to her life through incessant battery if the court refused to separate them.

She said, “My lord, Adekunbi now derives pleasure in beating the hell out of me not minding any circumstance.

“In fact, he is also sounding it as a note of warning to me that he would soon put an end to my life.

“Aside from that, he doesn’t even take my relatives as anything as he takes them for a pinch of salt.

“I have seven children, and I want to reap the fruits of my labour.”

However, Adekunbi who happily agreed with the divorce suit categorically stated that he beats her.

He said, “My lord, it is true that Idayat and I have been having running battle since the last 10 days over the pregnancy she cannot explain how it came about.

“For over three months now, Idayat has been starving me of sexual intercourse.

“Let me state that Idayat and I are farmers and our farmlands are not within Ibadan.

“Sometimes, she may stay away at the farm venue for two to three months and I will be the one looking after the children.

“So, when Idayat returned home last 10 days ago, I observed that her tummy was already protruding and she has started showing most of the symptoms she usually exhibit during pregnancy.

“When I asked her, she laughed and I told her to return the pregnancy to whoever owned it.

“I reported the matter to her elder sister and parents, they all fought me.

“For more than three months, Idayat does not allow me access to my conjugal right to her.”