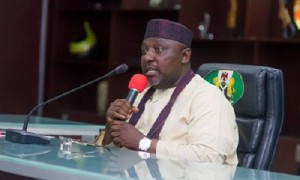 200 Internally Displaced Persons (IDPs) and other vulnerable students in Adamawa State have been offered scholarship by Imo State Governor Rochas Okorocha, it has been stated.

Adamawa state commissioner for Education Prof. Kaletapwa George Farauta disclosed this to Journalists in Yola on Saturday immediately after the flagging off distribution of free forms preparatory for admission into the Junior Secondary School of the Academy at Saint Theresa Catholic Cathedral Jimeta and Damare IDPs camp.

“The intention of Rochas was from very kind hearted gesture that we are appreciative of,” she said

Early this year, Okorocha built Rochas Foundation Academy in Yola through his foundation aiming to provide education to IDPs, other vulnerable and children of the less-privileged in the state especially those devastated by the Boko Haram insurgency.

The governor, during the laying of the Academy foundation in Yola, promised that if the school is completed, the institution would offer scholarship to vulnerable children and IDPs in Yola.

Farauta expressed gratitude over the gesture done by the Okorocha for building the Academy.

She said the setting up of the Academy was in collaboration with the Adamawa State government and the Rochas Okorocha Foundation for the educational advancement of vulnerable children to reduce the number of children ramming the streets of Yola, caused by the insurgency.

Farauta noted that “it is a step in the right direction” and therefore urged politicians and other wealthy individuals in Nigeria to emulate the gesture of the Imo state Governor for the benefit of vulnerable children in the society.

“I was confident that the pioneer students will excel despite non-completion of some structures at the school site”. She added