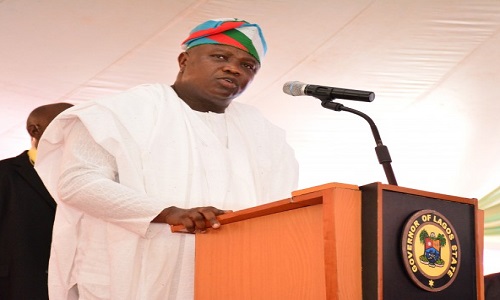 Lagos State Governor, Mr. Akinwunmi Ambode on Sunday assured that the State Government in collaboration with security agencies would soon rescue victims kidnapped from Lagos Senior and Junior Model College, Igbonla-Epe, vowing that the government would also commence a review of its laws to curb and effectively punish perpetrators of such act.

The Governor, who spoke shortly after carrying out an extensive inspection of projects across the State, also issued a 7-day ultimatum for all illegal structures on the State’s waterfront to be demolished.

Speaking to journalists at the Illubirin Housing Scheme in Lagos Island, the Governor who was visibly worried about the erection of several shanties and structures within the premises and especially on the waterfront, said such would not be allowed in the State anymore.

He said kidnappers, suspected militants and criminally minded persons often seek refuge in such shanties close to the waterfront, from where they perpetrate their heinous crimes and then make use of the waterways to ferry their victims to another location, in most cases to another state.

The Governor said, “I also want to use this opportunity to appeal to all those living in the shanties around these schemes especially on the waterfront illegally that they should vacate the areas forthwith.

“You will see that most of the issues that we have with kidnappings are actually being brought up by those who are illegal settlers by the waterfront. We will commence demolition of all the shanties around the creeks in Lagos State and also around our waterways in the next seven days. I have given directives to that effect to the appropriate agencies.

“The safety of our children and all Lagosians is paramount in this administration. We will not allow a few set of people who come into Lagos and stay on our waterfront illegally and then use it as opportunity to kidnap our people. I also want to assure our people that government is seriously on the issue of the children and the teachers that were kidnapped in the Igbonla Model College and very soon, we will get the victims back.

Governor Ambode, who also spoke on the plans to continue construction of the Illubirin Housing Scheme, said his administration has taken time to review its mortgage scheme vis-à-vis its financial flow, adding that the Illubirin axis would be designed as live, work and play environment under a private sector initiative.

“In addition to that, the other housing projects that we are doing are on course and I want to assure Lagosians that in the next few months, we will be seeing a whole lot of housing units being rolled out. We believe strongly that people should be able to pay one month rent and live in our housing schemes.

“We don’t think in a recession, we should be having a situation where we allow people to come and buy when they don’t have money or to come and pay one year rent. We think the way to move forward is to allow these our younger ones to just pay one month deposit and pay one month rent and move into the houses and then more or less play up our rent-to-own scheme,” Governor Ambode said.