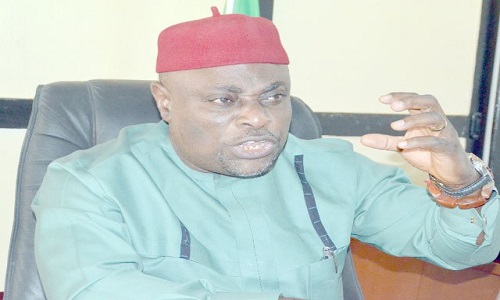 The National Chairman of the All Progressives Grand Alliance (APGA), Dr. Victor Oye, who was Thursday suspended by the National Working Committee of the party, has said that he is still in charge.

Oye told the News Agency of Nigeria (NAN) in Awka, the Anambra State capital on Friday that there was no substance in reports of his suspension, adding that APGA was growing more formidable under his leadership.

Rising from its monthly meeting in Abuja, the party’s NWC accused the suspended chairman and some other executive members of “immense constitutional breaches and inordinate practices”, adding that the action was in line with the provisions of APGA’s constitution.

Reacting to the speculations, the party chieftain described authors of reports of his suspension as saboteurs and dissidents, who were working with those against the progress of APGA to destroy it.

Oye said the party just concluded its monthly working committee meeting with all 29 members in attendance and wondered why just four members could generate such report even when they attended the meeting.

“The report about my suspension or sack is rubbish; it holds no substance whatsoever. I am talking to you from my office where we just had our NWC meeting attended by all members.

“I am surprised that just four people could go and generate such malicious story from nowhere. These people were also in our meeting. I tell you they are enemies of APGA. They are saboteurs and best described as dissidents; there is no crisis in APGA.

“It is unfortunate that some media organisations have used that story without confirmation; it is unethical not to balance a story, especially when it is not true”, Oye said.

The chairman also commended supporters of APGA in the recent Edo gubernatorial election but described the exercise as “not a true reflection of the minds of the people”.

Oye said it was ridiculous that a party which was the third largest in the country could not garner up to 1,000 votes according to the result released by the Independent National Electoral Commission.

“APGA joins other political parties to condemn and reject the published results of Edo governorship election. It was not a true reflection of the minds of the people of Edo”, he said.