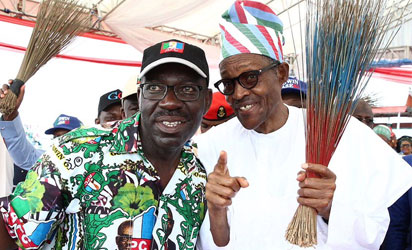 The Edo State governor-elect Mr. Godwin Obaseki and his deputy, Philip Shaibu has been presented with the Certificate of Return by the Independent National Electoral Commission (INEC).

According to INEC, the presentation was in accordance with the Electoral Act as amended.

The National Commissioner of INEC in charge of South South zone, Dr. Mustapha Lecky, while presenting the certificates on Thursday said only a tribunal could upturn the outcome of the election held on September 28.

Dr. Lecky said the commission would continue to improve on the electoral process with a view to deepening democracy in the country.

He added that INEC would also improve on the use of card readers as according to him, the device has helped to eliminate multiple voting and election rigging.