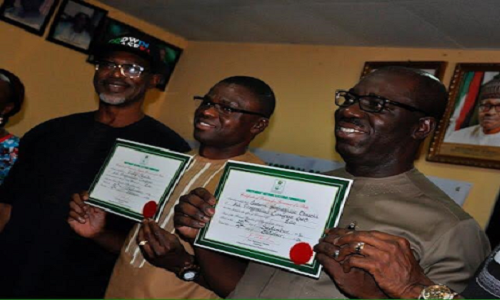 The certificates were presented to Obaseki and Shuaibu on Thursday by the INEC National Commissioner in charge of South-south, Dr. Mustafa Muhammed.

Obaseki, in a brief remark at the presentation of the certificates to him and his deputy, dedicated their victory in the September 28 governorship election to God and thanked people of Edo State for their support during and after the election.

The governor-elect promised to always put the interest of Edo people first, before any other consideration.

He also commended the electoral commission for conducting a peaceful poll in the state.

Shortly after the collection of certificates of return, Obaseki, Shuaibu and Director-General of Obaseki Campaign Organization, Barr. Osarodion Ogie, embarked on a road show to thank the people of the state for their support.