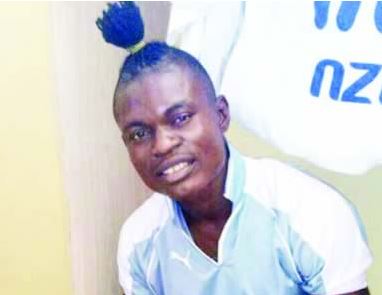 A player with the Shooting Stars Sports Club (3SC), a football club in Ibadan, Oyo State, Joseph Izu, who was killed by the operatives of the Joint Military Task Force in Okaki community, in the Ahoada West area of Rivers State, was shot at a close range.

Joseph’s father, Reuben Izu, and some residents stated this.

Joseph, 24, who was before his death the central midfielder of the football club, was allegedly shot dead on Sunday at the community jetty.

The late player was part of the 3SC, also called Oluyole Warriors, which finished 14th at the just concluded 2015/2016 season of the Nigeria Premier League.

Joseph’s father told one of our correspondents on the telephone on Monday that his son had gone to their hometown in Okaki to check on his wife before he met his untimely death.

“He was in Okaki with his wife before he died. He had planned to come to Port Harcourt where I live with his daughter.

“He went to the jetty area where we usually swim to have a quick shower on Sunday. It was while he was there that the men of the JTF raided the place and everybody ran helter-skelter, including Joseph.

“When the soldiers saw them running they began shooting sporadically and one of the bullets hit Joseph in the leg. As he was groaning with pain, one of the JTF men walked up to him and shot him a second time at a close range despite Joseph’s plea that he was a footballer on holiday in Okaki.

“His mobile phone and identity card were seized from him and we have not been able to retrieve them till now. The soldiers didn’t allow anybody to help him until he lost a lot of blood. After they left, he was taken to the hospital where he died due to loss of blood.”

Reuben added that the matter had been reported to the police.

Some residents of the community also told one of our correspondents that the ace footballer was shot by security operatives, who were chasing a suspect within the community.

One of the residents, who pleaded not to be named, stated that Joseph had pleaded with some of the JTF operatives that he was not the suspect they were looking for, adding that the security operatives did not listen to him.

He said instead, the soldiers shot Joseph at a close range.

Some community members were said to have rushed him to a nearby hospital, where he was confirmed dead.

The resident said, “The boy (Joseph) was at the jetty when security personnel in the area accosted him and shot him. They (joint task force team) were in search of a suspect when this happened.

“Joseph told them that he was a footballer, but his appeal fell on deaf ears as he was shot. He was later rushed to a hospital where he died.”

The 3SC described Joseph’s death as painful and shocking.

In a statement by the media officer of the club, Jubril Arowolo, the club General Manager, Rasheed Balogun, said family sources told the club management that Joseph and two other friends were shot and injured by security agents at a jetty in Rivers State.

The club said while the wounded friends of Joseph died on the spot, the 3SC player died on his way to the hospital.

The statement read in part, “The management of 3SC commiserates with the family of one of our players, Joseph Izu, who was killed on Sunday. He joined 3SC in the 2013/2014 season and was on the bench in the club’s last match of the season against Abia Warriors in Umuahia.

“He was a dedicated player who gave his best for the good of the club. We are going to miss him greatly. We pray to God to grant the family the fortitude to bear the loss.”

Also, the Nigeria Football Federation, in a statement, said the federation president, Amaju Pinnick, was grieved when he learnt of the incident and he immediately called the father of the late footballer.

Pinnick was quoted in the statement to have said, “I am sorely distraught with what has happened. It is an unfortunate incident that has brought sorrow to the Nigeria football family barely a week after we celebrated victory in a World Cup qualifying match.

“What has happened is most painful. I want to appeal to our football players to always be mindful of the company they keep and the places they go at all times, because they are special assets.”

The acting spokesman for 2 Brigade of the Nigerian Army, Port Harcourt, Lt. Oluyemi Shokoya, said the matter was being investigated.

“The 2 Brigade will soon issue a statement on the matter,” Shokoya added.

The state command Police Public Relations Officer, Mr. Nnamdi Omoni, told our correspondent that he had not been briefed on the killing of the footballer.