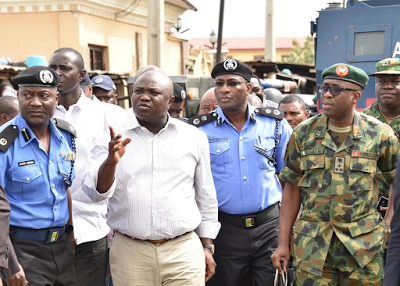 Governor of Lagos State, Mr. Akinwunmi Ambode, on Sunday ordered the immediate demolition of all shanties around the creeks and on the waterways.

Gov. Ambode gave the order when he visited the Ilubirin Lagos Homes project during an inspection tour of some parts of the state.

The governor asked all illegal occupants of the shanties to evacuate the area within seven days adding that the safety of citizens was paramount, hence the government’s zero tolerance for kidnapping and other crimes.

Ambode assured residents that government would review the laws on kidnapping and promised prompt and quick rescue of the students and teachers of Igbonla Model College, Epe, kidnapped on Thursday in their school.

“Most of the issues we have with kidnapping are perpetrated by illegal settlers by the waterfront.

“All shanties along the waterfront of the state must go because the safety of Lagosians is paramount in this administration.

“We will not allow a few set of people who come into Lagos illegally, then stay on our waterfront and use it as an opportunity to kidnap our people.

“We want to assure our people that we are up on the Igbonla kidnap and very soon we will get the students and the teachers back.

“I believe the era of kidnapping has come to an end and I can tell you sincerely, we will deal with kidnappers from from this moment on”, Ambode assured.

On housing, he said the rent to own scheme as promised by his administration would commence in the next few weeks.

“We believe our people should be able to pay one month rent and live in these housing schemes.

“We do not think in a recession we should be having a situation where we allow people to come and buy when they do not have money”, he said.

Ambode said other housing schemes were on course, adding that a lot of houses would be rolled out in the next few months.

Earlier, the Commissioner for Housing, Mr Gbolahan Lawal, said the Ilubirin housing scheme, which sits on 25 hectares of land to house over 1,500 families, would be completed in partnership with the private sector.