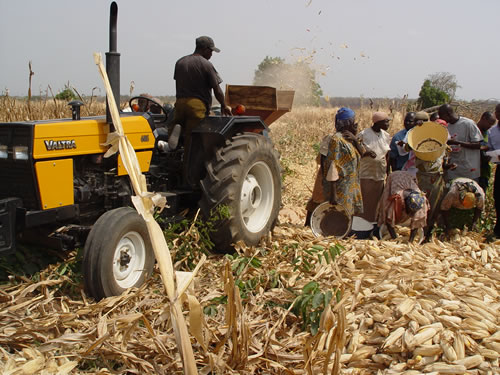 Kogi State Government has pledged to assist women farmers to embark on mechanized farming as part of the state’s agricultural road map toward food security.

The state’s Commissioner for Agriculture, Dr Tim Diche, made the pledge at the bi-monthly meeting of the state Agriculture Vision Group, Core Delivery Team, Agriculture Innovative Team and key stakeholders in Lokoja on Saturday

The meeting was facilitated by Synergos, a global Non-Governmental Organisation (NGO), partnering with Bill and Melinda Gates Foundation (BMGF), on the State Partnership for Agriculture (SPA), project.

Diche said women farmers had a lot to offer in realisation of the agricultural road map for the attainment of set goals and objectives in agriculture.

“The participation in agriculture generally by our female farmers is on the increase day in day out and by the time we are able to assist them with mechanisation, we will be there,” he said.

The commissioner, represented by Dr Isah Ochepa, Acting Permanent Secretary in the ministry, said the women were coming up and very interested adding that with factorisation, they would do excellently.

Mrs Bolanle Ampitan, Kogi state Commissioner for Women and Social Development, urged that seminars and workshops be organised for women farmers to sensitize them on modern farming methods and government’s agriculture policies.

Ampitan said there was need to improve on women farmers’ access to credit facilities adding that the process had hitherto been hijacked by ghost and political farmers denying the real farmers opportunity take advantage of loans.

She said the state would soon embark on screening of farmers to sieve the grain from the chaff and ascertain the real women farmers adding that the present administration was fully committed to the cause of women.

Mr Victor Adejoh, Kogi Team Lead for Synergos, in his remarks said the meeting was a solution-driven process with a view to generating information from participants to help address problems in the agriculture sector.

“Synergos is a unique organisation that looks at system shift. We are working on complex issues. We are out to catalyze and facilitate processes, provide linkages that allow government to further deliver on its promises in the agriculture sector,” he said.

The News Agency of Nigeria (NAN), reports that participants from Fadama, ADP, Federal Ministry of Agriculture, farmers’ groups, rice and cassava growers associations, United Bank for Africa, among others, attended the meeting.