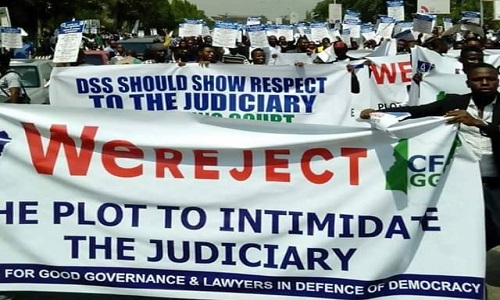 by the Department of State Service, DSS.

The lawyers under the aegis of Lawyers for Good Governance and Lawyers in Defence of Democracy, carried placards with various inscriptions such as “We reject the plot to intimidate the judiciary”, “DSS should show respect to the judiciary”, “Disrespect to court orders is an invitation to anarchy”, “Attack on judges who granted bail on bailable offences against govt wish is an attempt to silence the judiciary”, etc. 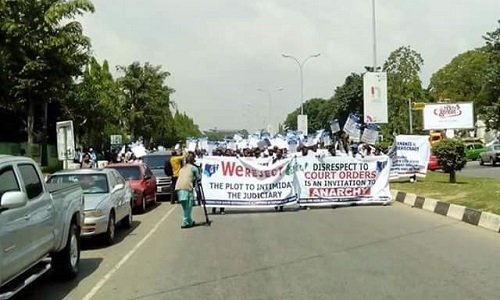 They began their protest from the Merit House and stormed the Federal High Court Headquarters in Maitama, the Attorney General’s office and the National Human Rights Commission.

The lawyers said that judges must not step down from cases involving the DSS as that would amount to victory for tyranny and intimidation.

They also demanded that all judiciary workers to go on strike until the DSS obey all pending judgments.