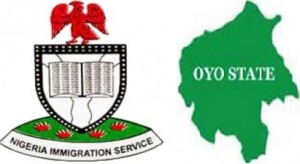 A man who was attempting to traffic six girls has been arrested by the Oyo State Command of the Nigeria Immigration Service (NIS).

It was alleged that the arrested man was trying to smuggle the six girls to Burkina Faso for prostitution.

Comptroller of the command, Ekaete Isang, said the man had travelled from Edo State with the girls to the border town of Saki in Oyo State, where he was caught trying to take them through an illegal route.

She said, “He was going to Burkina Faso with the aim of involving the girls in illegal activities but before he could cross the Nigerian border with them, our patrol team caught up with him and he was arrested. We have reunited the girls with their parents, while the man was handed over to the National Agency for the Prohibition of Trafficking in Persons.”

Isang accused leaders in border communities of the state of lack of cooperation, noting that they aid people that come into the country illegally.

“Our major challenge in fighting human traffickers and illegal immigrants is logistics because of the expansive nature of the border line in the state. We have met with grass-roots leaders in those communities but their response is not impressive. They shield these (traffickers and illegal immigrants) people from arrest and they don’t come up with information. We call on the state government to support the command in our effort to maintain order at the borders,” she said.