A man in Australia discovered two pythons fighting in his kitchen. 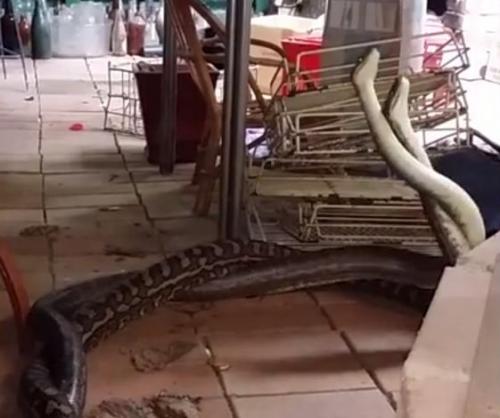 Murray Paas had strongly been suspecting the presence of snakes in his Queensland home – only to confirm his suspicion when he found the two pythons wrestling in his kitchen.

The pythons, which were male, were recorded by Paas battling one another apparently to prove who was superior as it was mating season.

Paas said he previously suspected there were snakes living inside his home, but he wasn’t bothered by their presence.

“I’ve been aware of one of these snakes living in the ceiling above my bedroom during the warmer seasons, which is no concern to me as these pythons are harmless and helpful for pest control, and to help keep away the deadly snakes that we’ve seen on the property,” Paas wrote online.

“On Sunday, I saw the tail of a large snake inside the kitchen as I returned from my shed,” he wrote. “The snake quickly went under a table and out of my sight. When I moved around to see where it was going it’d already started wrapping itself around the other snake to start the battle.”

“I can safely assume that there was a female python nearby they were fighting over,” the man wrote.