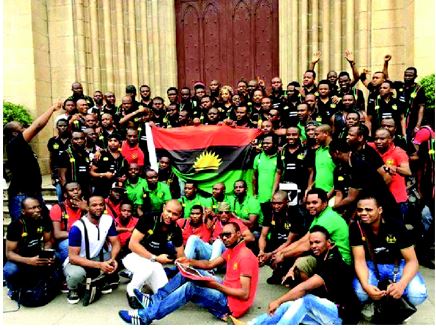 The Movement for the Actualisation of the Sovereign State of Biafra, on Sunday, threatened to organise an ‘internal revolution’ against political, traditional, religious and opinion leaders in Igboland.

MASSOB, which issued the threat in a statement signed by its leader, Comrade Uchenna Madu, said Igbo leaders were ‘insensitive’ to the plight of the leader of the Indigenous People of Biafra, Nnamdi Kanu, and other detained pro-Biafra activists.

Madu said, “The Movement for the Actualisation of the Sovereign State of Biafra blasts Igbo religious, traditional, political and opinion leaders for their nonchalant and insensitive attitude towards the plight of detained Biafra agitators in Nigerian prisons.

He asked, “What are the primary duties of Igbo senators and federal representatives in Abuja?

“Why must Igbo traditional rulers continue to celebrate ofalas and New Yam festivals while their subjects are still in detention for Igbo cause? What are the religious leaders still preaching while our brethren are still in prison?”

He warned that the internal revolution would start if Kanu and others spent the coming Christmas in prison.

“MASSOB still has high respect for few Igbo leaders who unflinchingly and boldly defend the interest and cause of Biafra agitators. Majority of Igbo leaders have brazenly betrayed Igbo cause and interest in Nigeria.

“Where are the likes of Senator Ali Ndume, the Sultan of Sokoto and Emir of Kano, Lamido Sanusi, Senator Bola Tinubu and Governor Ayo Fayose in Igboland?”

Madu stressed that the likes of Ndume, Sanusi, Tinubu and Fayose, whom he described as “fearless men,” had eloquently defended the cause of their people, unlike Igbo leaders.