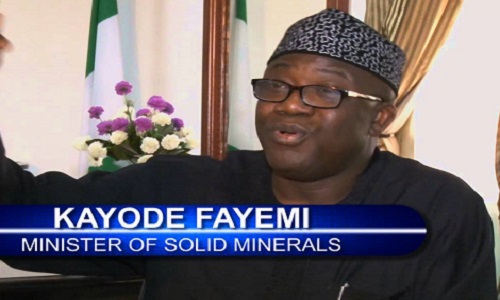 The Federal Executive Council (FEC), on Wednesday approved the release of a N30 billion intervention fund for the development of mining sector.

This was revealed by the Minister of Mines and Steel, Kayode Fayemi, as he said the sum was a fulfillment of President Buhari’s campaign promises when he pledged determination to diversify from the oil sector.

“You have heard all sorts of talks about how rich Nigeria is in mineral resources, but the quantity, quality and prospecting have been a challenge because we have neglected the sector for such a long time,” Fayemi said while addressing state house correspondents after the council meeting.

According to him, the government intended to spend the money specifically on exploration and research as he added that the ministry was already in negotiation with the Sovereign Wealth Fund and the Nigerian Stock Exchange to access private capital for mining.Fayemi confirmed that the government was already working out guidelines for successful implementation of the plan and the disbursement of the funds. The guideline, according to him, would be ready within a month.

The minister added that there was need to upgrade geological data in the sector, if Nigeria must attract mining investment into the country as in the cases of Burkina Faso, Ghana and Côte d Ivoire where an average of $300 million was spent yearly on exploration.