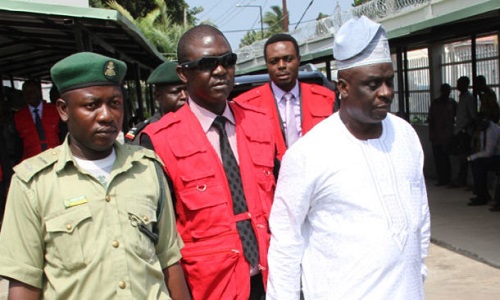 Immediate past Chief of Air Staff, Air Marshal Adesola Amosu (retd.), has told a Federal High Court sitting in Lagos that he is ready to plead guilty to charges of laundering N21billion.

Amosu and 10 others said yesterday that they were negotiating a plea deal with the Economic and Financial Crimes Commission, EFCC, which proffered the charges against them.

EFCC arraigned Amosu along with a former Chief of Accounts and Budgeting at the Nigeria Air Force, Air Vice Marshal Jacob Adigun and a former Director of Finance and Budget, Air Commodore Olugbenga Gbadebo.

They were accused by the anti-graft agency of converting the sum of N21billion from the NAF around March 2014 in Lagos.

They were also accused of concealing “proceeds of crime”, an offence contrary to Section 18(a) of the Money Laundering (Prohibition) (Amendment) Act, 2012 and punishable under Section 17(a).

At the resumed hearing on Tuesday, the defendants kicked against a bid by EFCC’s lawyer, Rotimi Oyedepo, to begin their trial.

They sought for more time to conclude the plea bargain with EFCC.

It would be recalled that after he was first arraigned in June this year, counsel to Amosu, Chief Bolaji Ayorinde (SAN), argued that the former Air Chief had returned “collossal sums”.

“He (Amosu) has remitted colossal sums of money to the Federal Government, although not in admittance of guilt, but out of cooperation with security agencies”, the Senior Advocate said.