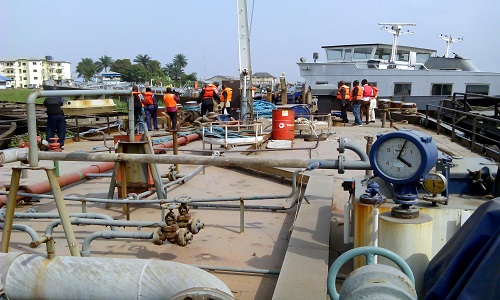 The Rivers State Command of the Nigerian Navy ship Pathfinder, has impounded two vessels with over 250,000 liters of illegally refined Automated Gas Oil at Wogono and Abonema wharf, in Okrika and Port-Harcourt city local government areas of the state.

The operation is in continuation of the clampdown of the Nigerian Navy on oil thieves and illegal bunkers on Nigeria’s maritime environment, the Commander of NNS Pathfinder, Commodore Obi Egbuchulam said while parading the suspects and the vessels.

“The suspects nabbed would be handed over to the appropriate agencies for investigations and eventual prosecution”.

The navy called on communities in the riverine areas to always make available useful information to aid the fight against pipeline vandalism, illegal bunkering and other maritime crimes.