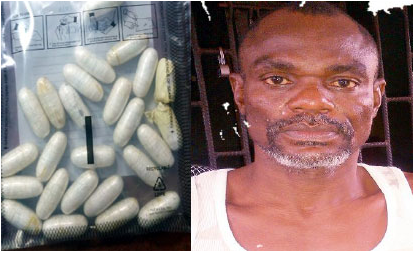 Onyekwere, a Rivers State indigene was arrested during the outward screening of passengers on a Kenyan Airways flight to Ivato International Airport, Antananarivo, Madagascar.

During interrogation, the suspect who excreted 25 wraps of cocaine said he went into drug trafficking out of frustration and his inability to provide for his family.

“I am married with two children and I sell shoes in Lome, Togo. As a result of the economic downturn, my capital kept depreciating until I lost everything.

“It was the frustration of not being able to provide for my wife and two children that made me go into smuggling of cocaine.

Confirming the arrest to newsmen, the NDLEA Commander at the Lagos Airport, Ahmadu Garba, said: “This is the first arrest and seizure in the year of a passenger heading to Madagascar from this airport.

“He is cooperating with our team of investigators and the case will soon be charged to court.”