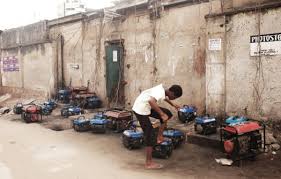 Balogun Shakirat woke up with a start at 3:00 am and put on the light in her workshop in a crowded working class district of Nigeria’s commercial capital, Lagos. In the following three hours, she was able to sew shirts, trousers and a jacket. Then the electricity supply went off again. “No light the whole day today,” she complained. Instead she stitched the hems of traditional Yoruba hats with a needle at her overheated single storey house and waited for night to fall. “NEPA brings light at night these days,” said Shakirat, referring to the National Electric Power Authority, or, as it’s often been called, “Never Expect Power Always”. The electricity provider hasn’t existed for years under the name NEPA, but it’s still talked about like a person, its presence or absence dictating the rhythm of Nigerian life.

Even at the best of times Nigeria, which is home to more than 170 million people, ranks among the lowest countries in the world for energy consumption at just 155 kilowatt hours per person. But these are not the best of times: production has wavered for the last few months between 1,500 to 4,000 megawatts. In comparison, South Africa, which has three times fewer people, capacity is more than 10 times greater at 45,000 MW. Between 8,000 and 9,000 MW is the bare minimum considered necessary for Lagos’ economy to function. But the megacity only gets about 10 percent of what it needs, leaving its 20 million or so inhabitants to their own devices. The richest use top-of-the-range inverters and huge diesel-powered generators to guarantee as much uninterrupted supply as possible. The less well-off have smaller generators that are used sparingly because of the rising cost of fuel; the poorest are stuck with kerosene lamps. – Pipeline attacks –

In Obalende, Shakirat said the power situation is affecting her business. “Before I could make 30,000 naira a week ($95, 84 euros). Now it’s 10,000 because of NEPA. It’s since April. We don’t know why,” she said. In fact, April was when the Niger Delta Avengers group conducted its first major attacks in the creeks and swamps of Nigeria’s oil-producing south. The rebels have since regularly blown up energy infrastructure and promised to bring Nigeria to its knees as long as its demands are not met. On Monday, Shell was forced to shut down the Trans Niger Pipeline, which feeds the Afam VI electricity power station in Rivers state. As yet, none of the alphabet soup of armed groups sabotaging the region’s oil and gas infrastructure has claimed responsibility for the attack. But last week, the NDA said it had blown up the key Bonny pipeline, breaking a ceasefire it had declared a month before.

Dallas Peavey, the executive director of Egbin Power, the biggest electricity power station in Nigeria, has blamed government policy for the situation and had a stark warning for the future. “It’s going to be dark in Nigeria soon,” he was quoted as saying in a recent newspaper interview. New players took advantage of the liberalisation of the power sector in 2013 and invested in Nigeria, which because of its huge need for electricity, was seen as an eldorado. But three years later, oil prices have plummeted on the world market, hitting Nigeria hard given that crude export sales account for some 70 percent of government revenue. Foreign exchange is in short supply, the economy in recession and the turbines of Egbin are now running at only 30 percent capacity because of the attacks in the delta. “We are owed over 86 billion naira by the federal government. We have been producing but we haven’t been paid for almost six months,” said Peavey. Energy minister Babatunde Fashola, the former governor of Lagos state, tried to reassure investors earlier this week at a major industry conference at Lagos’ plushest hotel. “Debts will be paid. Leaders promote hope. Leaders do not create panic,” he thundered. Not long afterwards there was a power cut in the huge conference hall.

Dolapo Oni, energy consultant at the Ecobank Group, said Nigeria needs an off-grid solution such as solar to tackle the energy deficit. “The government signed a 1.1 MW solar power plan but it will come in three, four years,” he said. But to pay off its debts, the government “needs to collect revenues, and to implement sanction for electricity thefts”. “The gas price is not economic for producers, they can’t get return on their investments, so the government needs to increase the electricity tariffs… But politically it’s an issue.” Back in Obalende, Abiodun Bolanle is soldering a football goalpost. The noise of his generator is deafening. It’s been running for 12 hours straight, costing him at least 1,500 naira a day. “If there’s no light, I still have to pay NEPA and also fuel. This is not fair,” he said.