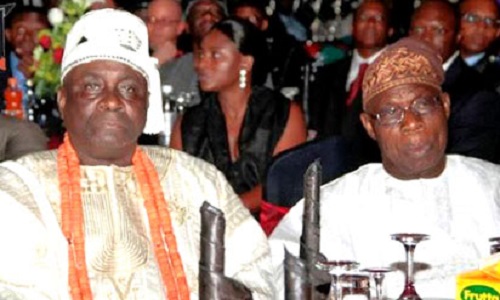 Oba of Lagos, Rilwan Akiolu, has blamed former President Olusegun Obasanjo for failure of Lagos not being granted special status.

The Senate had last Wednesday rejected a bill sponsored by Senator Oluremi Tinubu (APC/Lagos Central) seeking special status and federal grants for Lagos State in view of the avalanche of socio-economic challenges it is facing as former political capital of Nigeria.

Speaking yesterday at the third quarterly town hall meeting organized by the Lagos Government at the Indoor Sports Hall, Teslim Balogun Stadium, Surulere, Oba Akiolu noted that Obasanjo had all the opportunity to have granted Lagos a special status during his eight years tenure, but never did it in spite of the pressure mounted on him.

He added that when a delegation of eminent Lagosians, which he led, met with the former president on the issue, Obasanjo told them that he had already drafted the special status plan for Lagos.

Oba Akiolu said if Obasanjo had fulfilled that promise, the issue of the National Assembly turning down Senator Tinubu’s bill would not have arisen.

“Yar’Adua had promised to grant Lagos a special status. If Yar’Adua had not died, it would have happened by now”, the monarch said.

Nonetheless, Akiolu said it was a matter of time as Lagos would certainly be accorded a special status.

He also expressed worry over the spate of kidnapping in Lagos despite the efforts of Governor Akinwunmi Ambode to provide security, calling for the establishment of Local Government Security Committee to work with the police to nip kidnapping in the bud.

The event was attended by Senator Tinubu, Senator Ganiyu Solomon, Chief Tajudeen Olusi, party chieftains, captains of industry among others.