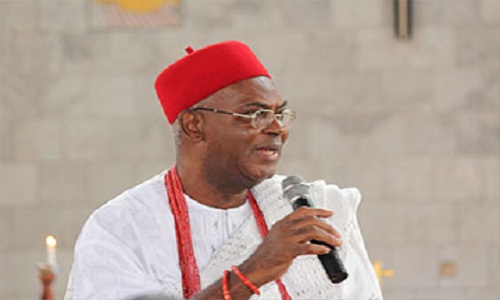 The Obi of Onitsha, Igwe Alfred Achebe, on Saturday urged Nigerians not to blame President Muhammadu Buhari for the current economic hardships they are passing through.

The royal father made the call in a speech to mark his 15th Ofala festival in Onitsha, Anambra State on Saturday.

According to him, things went wrong because of the collective decisions made by the previous regimes.

Igwe Achebe, however, urged President Buhari to consider the advice of many Nigerians on the way out of the economic hardships.

“Many Nigerians, including Prof. Chukwuma Soludo, Emir of Kano, Sanusi Lamido Sanusi and Cardinal Francis Arinze, have spoken and joined attention to the sufferings of the people.

“Buhari should look into the collective views

of Nigerians in addressing the current recession”, he said.

He urged the president to also look into the alleged constant harassment of citizens by herdsmen across the country.

Achebe commended Governor Willie Obiano of Anambra for his policies and major strides in agriculture, security, education and health, pointing out that it had yielded results in the state.

While also commending the governor for the N20 million special projects in the 177 communities of the state, the monarch pointed out that Onitsha, which generated a large chunk of the state revenue, was marginalized in the arrangement.

The Obi of Onitsha, therefore, urged Gov. Obiano to complete the hydrocarbon and petroleum projects in the state as well as the five star hotels

under construction in Awka and Onitsha.

Mr. Achebe noted that peace building, love and mutual respect now reign in Onitsha under his leadership, adding that he had commenced an anti-drug rehabilitation of youths in the area.

According to him, this is aimed at preventing drug abuse among youths.

In his remarks, the governor said that he reduced some taxes on wheelbarrow pushers, petty traders, tricycle operators and motorcycle riders to ameliorate the effect of the current recession.

He promised additional N20 million projects, each for Onitsha North and Onitsha South Local government areas, and said the ones already executed in the communities were of desired standard.