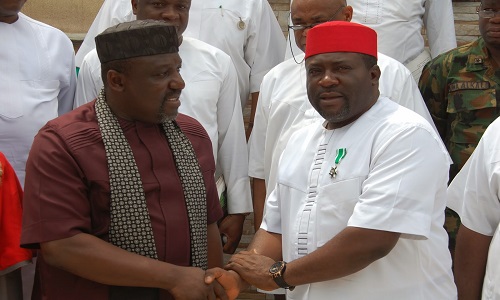 Governor of Imo State, Owelle Rochas Okorocha, yesterday, declared that he has not yet chosen his successor.

He made the declaration during the launching of a book written on his deputy, Prince Eze Madumere, at the New Concord Hotel

The book was authored by Peter Cleaver Obi.

Gov. Okorocha explained that the event did not, in any way translate, into a ceremony to endorse Madumere as would-be governor of Imo State.

Describing Mudumere as his son in whom he was well pleased, Okorocha said that his joy as a father was to see his son rise in positions of authority.

The governor recalled that his deputy stood by him in times of joy, difficulties and failure.

Mudumere was a chief of staff to Okorocha before he was elevated to the position of deputy governor following the impeachment of the former occupier of the seat.

While commending the writer of the 186-page book titled: “Eze Madumere, A True Manifestation of a Loyal Prince” for doing a good job, Okorocha noted that nobody can tell the story of his deputy better than himself (Okorocha).

In his remark, the Kano State Governor, Abdullahi Umaru Ganduje, praised Madumere for demonstrating high level of loyalty to his boss.

Gov. Ganduje pointed out that for a state to move forward, there must be cordial relationship between governor and his deputy.