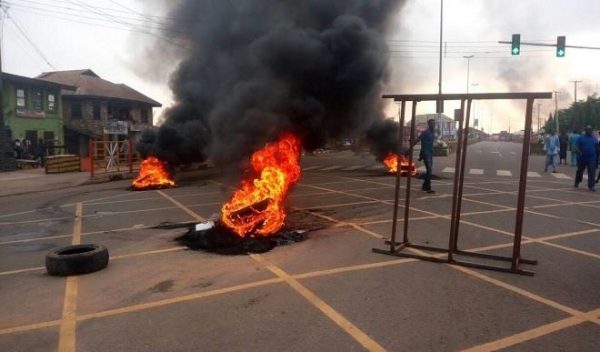 Following the outbreak of violent protests in Akure and some other parts of Ondo State by aggrieved Peoples Democratic Party (PDP) members, the State Police Command has assured residents of the state of their safety.

The aggrieved PDP faithful had in early hours of Friday, taken to the streets in protest against the decision of the Independent National Electoral Commission (INEC) to replace the name of Eyitayo Jegede with Jimoh Ibrahim as the party’s candidate for the November 26 governorship election.

The Ondo State Police Public Relations Officer, Femi Joseph, while confirming the development, assured residents of the police’s commitment to protect their lives and property.

Mr. Joseph, an Assistant Superintendent of Police, ASP, enjoined the people to keep calm as normalcy would soon be restored.

According to him, the command had dispatched officers and men to the scene of protests on Oba Adesida Road.

“We are aware and our men are on their way to the scene, I will speak with you more later as the incident develops”, ASP Joseph told the News Agency of Nigeria.

“We are trying to coordinate our men so that the incident will not escalate”, he added.

It was learnt that taxis and buses had to drop off passengers and in some cases, take alternative routes to their destinations due to bonfires set up in major highways in Akure, the Ondo State capital by the protesters, who also blocked the streets.

It was further learnt that similar protests are holding on in Ondo City and Ore.

We had earlier reported here that Governor Olusegun Mimiko had rushed to Abuja where he is currently holding a closed-door meeting with President Muhammadu Buhari at the Aso Rock Presidential Villa over recent political events in Ondo.