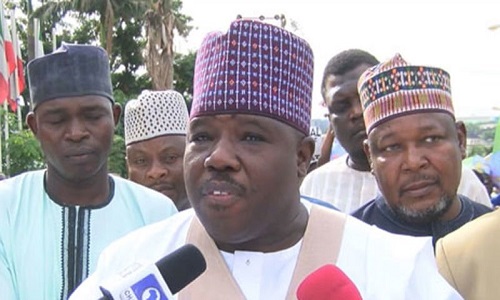 A graduate, Muhammed Isa, 32, has once again embarked on a long trek from Lagos to Abuja in solidarity with the Peoples Democratic Party, PDP faction led by Senator Ali-Modu Sheriff.

Isa, who started the trek from Berger footbridge along Lagos-Ibadan Expressway, told newsmen before departing at about 9.12 a.m on Monday that youths of the party support Sheriff as the Chairman.

“I am on solidarity trek from Lagos to Abuja to show my support and the support of youths to Sheriff as the authentic national Chairman of PDP”, he said.

The PDP has been enmeshed in internal leadership squabbles with Senator Ahmed Markafi and Sheriff both laying claims to the national chairmanship of the main opposition party.

Isa, a graduate of Psychology, claimed that the youth felt that Sheriff was the best person to manage the affairs of the party.

“I want to make something clear, Ali-Modu Sheriff is someone who is honest and listens to grassroots politicians; he has been working tirelessly to ensure that PDP regains its lost glory.

“This is the type of person we need as a leader to move the party forward”, he said.

The indigene of Borno said he hoped to finish the trek within 23 days.

“I have already planned my journey, I will be trekking from morning to evening, wherever dusk meets me, I look for an accommodation there.

“After morning prayers, I will resume trekking”, he said.

Asked about the security measures he has in place, Isa said he had none but believed God was with him.

“I believe with Allah on my side, no evil will befall me because I am not doing something that is bad or injurious to the country”, he said.

Then, he trekked from the same Berger area of Lagos to Abuja with the reason that Jonathan made a great sacrifice for the unity of the country.

“The fact that I am a Muslim does not mean that I should not celebrate Jonathan for the sacrifice he made for this country by accepting defeat”.

Isa, who expressed optimism that he would meet the President and present him an award then, however, said that “if I did not see him, I don’t care.

“If I die on the road, I still believe that I die for what is right”, he said during the trek that began on May 6. (NAN)