DESPITE the federal government’s assurance that the price of petrol will reduce from N145 per litre, it sold above the price in 15 states of the federation, last September, data from the National Bureau of Statistics, NBS, has shown.

According to the NBS, Cross River State led the price table with N154.6, followed by Kaduna, which had N151.8, while Kogi occupied the third position with the price of N150.4. In Enugu State, petrol was sold at N148.7, while it was sold at N148.5 in Bornu and N148 per litre in Kebbi State during the period under review. 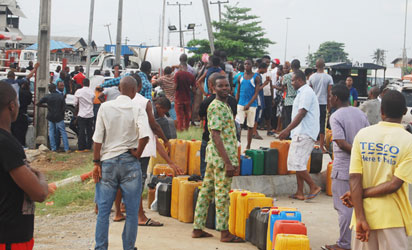 The NBS also stated that energy and energy related prices continue to be the largest increases reflected in the Core sub-consumer index. According to the Bureau, in September, the core sub-index increased by 17.7 percent during the month, up by 0.5 percent points from rates recorded in August (17.2 percent). During the month, the highest increases were seen in the Electricity, Liquid Fuel (kerosene), Solid Fuels, and Fuels and Lubricants for Personal Transport Equipment groups.

It further stated that the Consumer Price Index (CPI) which measures inflation increased by 17.9 percent (year-on-year), 0.24 percentage points higher than the rate recorded in August 2016 (17.6 percent).