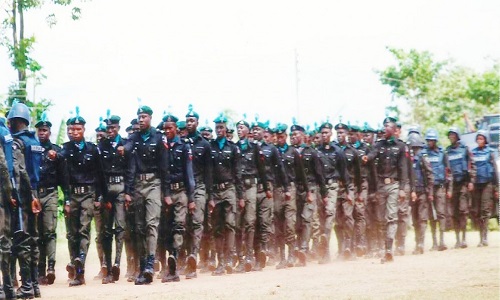 The Enugu State Police Command on Monday said that it arrested two armed robbery suspects that has been tormenting residents of Achara Layout within Enugu metropolis.

The command’s spokesman, Mr Ebere Amaraizu, told the News Agency of Nigeria (NAN) in Enugu that the suspects had been disturbing the layout for over two months.

Amaraizu noted that the suspects were nabbed through police operatives’ response to a distress call.

“The criminals and their cohorts now at large were operating at a shop on gun point at Awkunanaw Street in Achara Layout on Thursday at about 4 pm where suspects have allegedly robbed a sales girl of an undisclosed amount of money and valuables.

“It was gathered that on arrival, suspects allegedly engaged police in a gun duel and the ensuing gun battle resulted in the arrest of Obumneme Nwafor, who already had been touched by bullet.

“His arrest, however, promptly guided police operatives in the arrest of Emeka Oparaugo alias cross-over.

“Recovered from the suspects are locally made pistols with double mouth, two cell-phones,’’ he said.

Amaraizu said that the suspects were helping the police in its investigation.

“A manhunt on the fleeing members of the gang have been intensified with a view to arresting them,’’ he said.