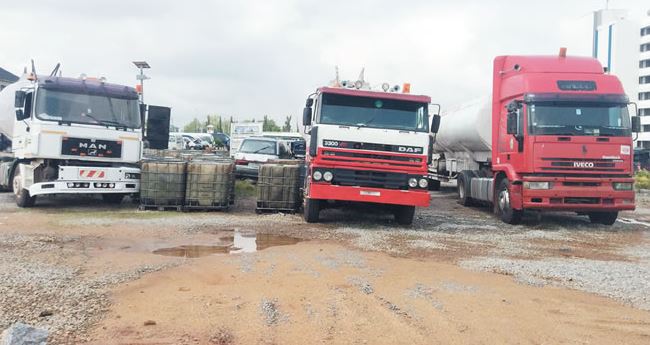 The police have arrested three members of the National Union of Road Transport Workers and five members of a vigilance group in Kogi State for vandalising pipelines and siphoning crude oil which they also refined by themselves.

The eight suspects, who were arrested by the Inspector-General of Police Special Task Force on Pipelines Vandalism and Illegal Bunkering in Monkey Village, near Lokoja, Kogi State, have been brought to Abuja for further investigation.

Others are, a truck loaded with 20 storage tanks filled with refined petrol and a Toyota Sienna bus.

All the exhibits have also been brought to the Force Headquarters, Abuja, by the task force team leader, Murtala Abdullahi, who led the operation against the vandals.

Sources familiar with the investigation said more suspects were being sought in connection with the incident.

“The suspects are undergoing interrogation on their level of involvement in the crime. We are also on the trail of other members of the gang, who escaped arrest,” a source explained.

Meanwhile, the IG, Ibrahim Idris, has declared open a training workshop to address human rights violation by men of the Special Anti-Robbery Squad across the country.

The workshop, he said, would broach various topics, including arrest and detention, use of force and firearms, maintenance of public order, investigation of crime, search and seizure and crime scene management.

Idris, who was represented by the Deputy Inspector-General of Police, Operations, Joshak Habila, at the training on Wednesday in Abuja, explained that the workshop was facilitated by a civil society group, Nigerians Unite Against Terror, led by Dr. Joey Okei-Odumakin.

Odumakin, said the public must have confidence in the police, noting that law enforcement cannot succeed without the support of the citizens.

She praised the IG for showing commitment to the course of effective policing and protection of human rights in the country.