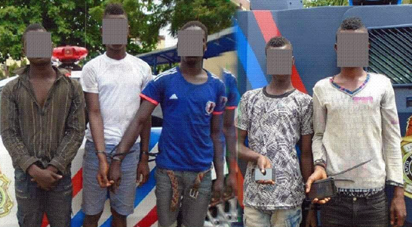 Operatives of the Rapid Response Squad, RRS, of the Lagos State Police Command, have smashed a teenage robbery gang, whose members masquerade as load carriers in Oshodi area of Lagos, arresting six of its suspected members.

During preliminary investigation, the gang was discovered to have over 50 teenagers as members.

Its modus operandi included posing as load carriers or bus conductors, only to flee with their victims valuables, which were meant to be taken into commercial buses or across the road.

Its victims as gathered, were mainly female. Luck ran against one of them, Ganiyu Rahman, after he allegedly snatched a mobile phone from a female undergraduate of the University of Lagos.

His arrest, led to those of other suspected members of the gang. During interrogation, Rahman, 15, blamed his action on his parents separation, disclosing that he was forced to join the gang because he had no place to sleep.

According to him, “I have been sleeping under Oshodi Bridge since 2013, after my parents separated. I work as a conductor and when I do not have any bus to work with, I will join my peers to rob and snatch valuables in Oshodi.

“Three of us stole the Microsoft phone from a lady’s bag. We pretended to be helping her to get a bus, but our target was her phones. I have been committed to 13 month rehabilitation by the Lagos State Taskforce, but my home is in Oshodi Under Bridge.

“We are over 50 boys. We are always at Oshodi-Oke, from morning till late night.

“Some of us genuinely help people to carry their loads, while a lot of us are there to snatch handbags, phones and other valuables from people. At times, we pretend to be helping them but our focus are their valuables.

“Most times, we work in groups. While the other is helping out, another person would steal the victim’s valuables either from the bag or pocket.

“There are some other members, who forcibly dispossess people of their belongings. They operate in the early morning and late at night, when their victims are helpless.”

One of his alleged partners in crime, Sadiq Adebayo, 15, admitted to have stolen an Iphone and a Phantom Tecno phone from a car, in the company of two other members of the gang whose name he gave as Osas and Janbele.

He said: “We sold the two phones along with seven other phones to Tuwo in Idi-Oro, Mushin. I got N7,000 from the proceeds.”

The Lagos State Police Public Relations Officer, Superintendent Dolapo Badmus, who disclosed that the suspects had been transferred to the Lagos State Task Force, advised parents to always monitor the activities of their wards.

She stated that the command would not leave any stone unturned in its resolve to rid Lagos State of criminal elements.