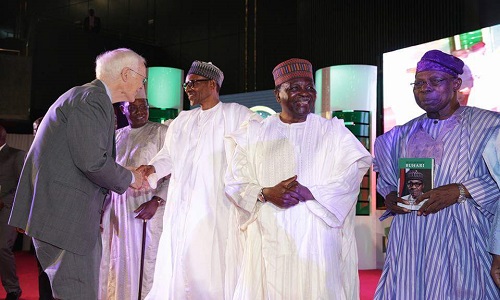 Proceeds from the Book launch of “Muhammadu Buhari: The Challenges of Leadership in Nigeria”, would be donated to charity efforts in the North East of the country, Information Nigeria has learnt.

The book, which is a biography of President Buhari, was written by an American Professor, John Paden.

The book was launched Monday in Abuja at the International Conference Centre with dignitaries gracing the occasion.

“Let me say that the proceeds of the launch of this book will all go to some select charities including humanitarian aid to the Internally Displaced People (from Boko Haram activities) in the North East”, said Mr. Paden, a Professor of International Studies.

The author described the book as an attempt to introduce Buhari to the international audience since Nigerians already knew who the president is.

The North East, which is the hotbed of Boko Haram insurgency, is currently grappling with humanitarian crisis.

Although the event was well attended by very wealthy individuals, the organisers, in tune with the president’s disdain for opulence, also announced that no one would be allowed to make huge donations or purchase copies in millions of Naira.

Rather, one of the organisers, Samaila Funtua, announced that the cover price of the book was pegged at N1500 for the soft cover, N2500 for the hard cover and N10,000 for the leather cover.

Following the directive, the two presenters of the Book, Abdulsamad Rabiu and Tunde Folawiyo, simply announced they were purchasing two copies for each of the nation’s tertiary institutions.

Former President Olusegun Obasanjo was Special Guest of Honour while former Head of State, Yakubu Gowon, was Chairman of the event.