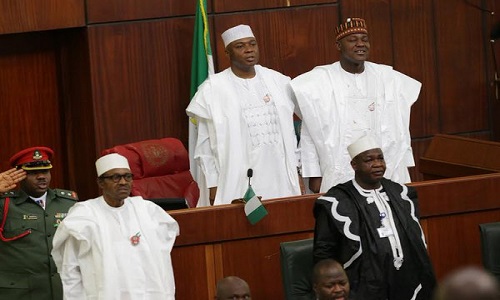 The Senate has passed eight Bills – aimed at ending the current economic recession in the country – it received from the House of Representatives for concurrence.

The Bills, which would be promptly forwarded to President Muhammadu Buhari for assent, were considered and passed in a single sitting of the Senate.

Senate President, Bukola Saraki, yesterday, in a statement signed by his media aide, Yusuph Olaniyonu, said the consideration and passage of the Bills in a single sitting was a demonstration of the commitment of the 8th National Assembly to employ all legislative mechanisms at its disposal to end the current economic recession in the country.

According to Saraki, “By now it is clear that the Senators take Nigeria’ economic situation very seriously. If you recall, one of the points from the 21-point resolution passed by the Senate on the economy stated that it would fast-track all economic related bills. What this Senate has done is match its words with its actions”.

The 8 Bills, which are all primarily amendments to existing laws, are aimed at strengthening the enforcement mechanisms in sectors of the economy that can help boost Internally Generated Revenue.

Important highlights of the Bills include the amendment to the Telecommunication and Postal Offences Act, which is aimed at increasing some of the prescribed penalties, fines and compensations for non-compliance with the Act. This is intended to help boost investment and participation in the telecommunications sector.

Mr. Saraki further stated that the 8 Bills will be promptly forwarded to the president for assent.

“Moving forward, Nigerians can expect that the legislature will adopt a united and efficient approach to getting Nigeria’s economy back on track”, he said. “We will quickly forward these 8 Bills, which have been passed by both Houses of the National Assembly to the President. This is only a first step and we will continue to work to ensure that at the end of our tenure, Nigerians will see that this is a people-centred National Assembly”.