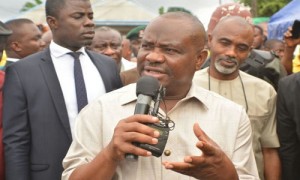 Rivers state governor Nyesom Wike, has said that the state government has started the process of creating 10,000 jobs for unemployed youths through the expansion of agriculture projects.

Wike said in his address at a reception to mark the coronation and thanksgiving in honour Chief Mike Elechi as Obua Weze in Elele, Ikwerre local government area.

According to a statement by Mr Simeon Nwakaudu, the governor’s Special Assistant on Electronic Media, said: “Aside the development of infrastructure across the state, we are working with private investors to create 10,000 jobs through key agriculture projects”.

Wike, who was represented by his Chief of Staff, Mr Chukwuemeka Woke, said that the 10,000 jobs would be created with the expansion of Resonpalm Oil Plantation in Ubima.

He said that his administration was partnering Siat Limited to plant new nurseries at the oil palm plantation in the extensive expansion scheme.

He added that his administration was also in the process of re-activating Delta Rubber Ltd. in partnership with private investors to ensure that more jobs are created for the people.

He urged the people of Elele to continue to support his administration to improve their standard of living.

The governor noted that Elele was one of the first communities that started the process that led to the emancipation of the state.

He congratulated Elechi on his coronation as Obua Weze and described the honour as “call to service.’’