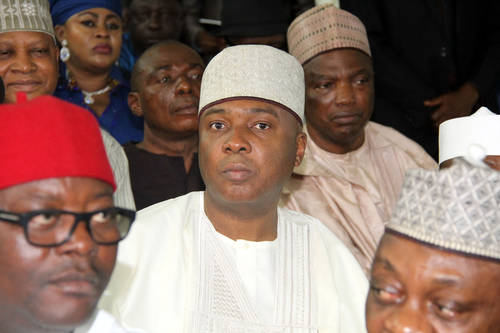 Senate President Bukola Saraki yesterday dissociated himself from a suit initiated by Timipa Jenkins Okponipare at the Federal High Court, Abuja seeking to quash his ongoing trial at the Code of Conduct Tribunal (CCT).

Mr. Okponipare had filed an enforcement of fundamental human rights suit before Justice Gabriel Kolawole on behalf of the Senate president, declaring that the plan to resume Saraki’s trial at the CCT is a breach of his fundamental right to fair hearing as guaranteed by Section 36(1) of the 1999 Constitution (as amended).

He also prayed for an order of the court compelling the CCT and Attorney General of the Federation to suspend indefinitely, any plan to resume the trial at the CCT.

However, a statement by Mahmud Magaji (SAN), lawyer to Saraki, said the number three citizen never instructed Okponipare to institute such a suit on his behalf.

The statement reads: “We do not know the complainant in the purported case. Dr. Saraki has not instructed any lawyer to file a suit in the Federal High Court, Abuja, or any other court, wherein a purported issue of fundamental human rights to challenge the case before the CCT was filed. We hope the reported case is not arranged to target the decision which the CCT is billed to deliver tomorrow (today) concerning the competence of the Tribunal chairman, Mr. Danladi Umar, to continue presiding over the Saraki case.

“We call on members of the public to know that Dr. Saraki will explore all legitimate avenues to prove his innocence of the charges filed against him before the CCT but he will not be a party to abuse of the court process in whatever manner”.

Meanwhile, the application filed by the Senate president concerning the competence of the CCT chairman was dismissed earlier today.

In a ruling on the application, Justice Umar said he would have disqualified himself “but for the constraints placed on the Chairman by the Constitution of Nigeria that established the Code of Conduct Tribunal”.

He said the application to recuse the Chairman has not been contemplated at the conception of the Constitution.

Mr. Umar further pointed out that for the president to even remove the Chairman or a member of the Tribunal, he must transmit a written address to the National Assembly and obtain a two-third consent from both chambers of the legislature.

The Chairman ruled that “the allegation of the applicant is based on mere conjecture of the media”.

“The application of the defendant is not well founded and it is hereby refused”, he ruled.