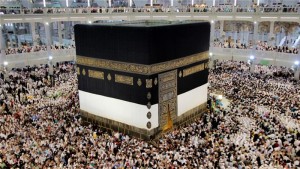 The Kingdom of Saudi Arabia will increase its charges for visas for people to visit the country in order to complete Islamic pilgrimages.

The ruling Council of Ministers, chaired by Crown Prince Muhammad Bin Naif, announced that anyone applying for a visit to complete the Hajj for a second time will be charged SR2000 for each visit.

The same fee will apply for people wishing to complete the Umrah, a similar pilgrimage to Mecca but one that can be completed at any point in the year, for a second time. Although a visa for the first visit for Hajj will remain free.

Prices for general visits will increase to SR200 for a two-month visa and SR300 for three, the Saudi Gazette reported. The fees will come into force on Sunday.

The increase in charges comes as the kingdom tries to gain more revenue following a decline in its finances caused by the slump in the oil price.

Oil prices have fallen due to the surplus of oil production.

The Organisation of the Petroleum Exporting Countries (OPEC) recently agreed a deal to limit the production and exportation of oil by its member states to tackle the problem.