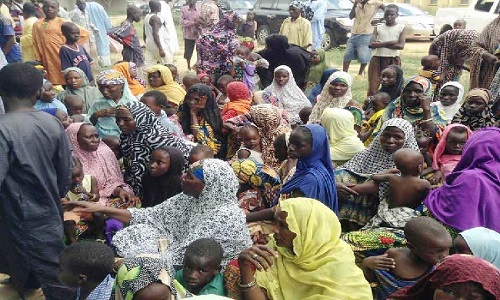 A group that goes by the name Human Rights Watch has claimed female Internally Displaced Persons (IDPs) living in camps across the northeastern states have been subjected to rapes and exploitation by government officials.

The group made this shocking revelation in a report published on their website on Monday, where they accused the Federal and States Government of doing little or nothing to protect the affected women and girls or punish the officials involved.

According to the report, over 43 cases of rape and exploitation of women and girls have been documented in several IDP camps in Maiduguri in late July adding that the victims were displaced “from Borno towns and villages, including Abadam, Bama, Baga, Damasak, Dikwa, Gamboru Ngala, Gwoza, Kukawa, and Walassa.”

“Four of the victims were drugged and raped while 37 were coerced into sex through false marriage promises and material and financial assistance,” the report said.

“Women and girls are abused by members of the security forces and vigilante groups, the report claimed, the civilian self-defense groups working with government forces in their fight against Boko Haram told the group (Human Rights Watch) “they feel powerless and fear retaliation if they report the abuse.”

A Senior Nigeria Researcher at the Human Rights Watch, Mausi Segun said: “It is bad enough that these women and girls are not getting much-needed support for the horrific trauma they suffered at the hands of Boko Haram.

It is disgraceful and outrageous that people who should protect these women and girls are attacking and abusing them.

Read more on the report here.