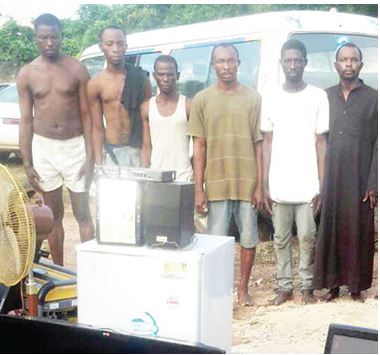 The Zone 2 Police Command, Onikan, Lagos State, has arrested a six-man robbery gang which allegedly attacked residents of about 15 communities in Lagos and Ogun states.

Our correspondent gathered that the suspects were apprehended by the Zonal Intervention Squad on Sunday after one of them was trailed through a stolen phone.

It was learned that the suspects had robbed in the Abata, Ifo, Arigbajo, Ewekoro, Mowe, Adigbe, and Ota areas of Ogun State, and also in the Iju, Alakuko, and Agege areas of Lagos State.

A police source told our correspondent that the stolen phone was tracked to Akinola, who alongside other gang members, had allegedly gone to rob at Arigbajo community.

He said, “The police got a tip-off that the robbers had been terrorizing residents of more than 15 communities in the two states. It was in the Arigbajo area of Ogun State that they robbed a resident and collected his mobile phone. Luckily for the police, one of the suspects, Akinola, began to use the stolen phone. It was the phone that gave him away as the police tracked it and arrested him.

“The victim had reported the robbery to the police, and investigation had begun. We placed the suspects under surveillance, and they were eventually arrested on Sunday. Through Akinola, we were able to trail the other suspects and arrest them.”

The gang’s operational vehicle, a Mazda bus with number plate, BDG 602 XM, was also recovered by the police.

He said, “The police worked with the Information and Communications Technology experts to arrest Akinola and others. The Assistant Inspector-General of Police, Zone 2 command, Abdulmajid Ali, has directed that the suspects be charged to court without delay.”