A key to a locker in the legendary sunken Titanic ship has sold for £85,000 at an auction.

The corroded small key was used by a steward named Sidney Sedunary, one of the 1,500 passengers and crew who sank with the mighty ship in 1912.

The item was sold at auction along with hundreds of other items from the doomed vessel.

The key, which is attached to a brass tag stamped “Locker 14 F Deck”, is believed to show Mr Sedunary worked on the F Deck on the night which the ship sank. 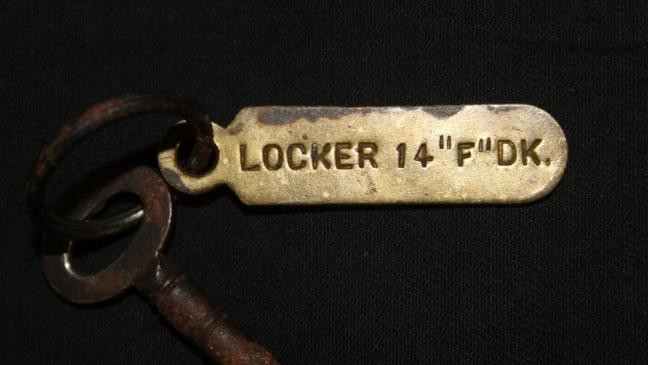 The key was sent to Sedunary’s pregnant wife Madge after his body was recovered and remained in the family until the sale.

Other lots included a postcard written on board the Titanic by chief wireless operator Jack Phillips which sold for £19,000.

Mr Phillips stayed at his post to send distress messages as the ship sunk and is believed to have drowned.

A letter written by the ship’s second officer Charles Lightoller, which reveals his parting moments with the vessel’s assistant surgeon Dr John Simpson, fetched £34,000 at the auction.

The note reads: “They were all perfectly calm in the knowledge that they had done their duty and were still assisting by showing a calm and cool exterior to the passengers.

“Each one individually came up to me and shook hands. We merely exchanged the words ‘goodbye, old man’.

“This occurred shortly before the end and I am not aware that he was seen by anyone after.”

Titanic was a British passenger liner that sank in the North Atlantic Ocean in the early morning of 15 April 1912, after colliding with an iceberg during her maiden voyage from Southampton to New York City.

It’s wreck was first discovered over 70 years after it’s sinking, and still remains on the ocean floor, split in two and gradually disintegrating at a depth of 3,784 m.