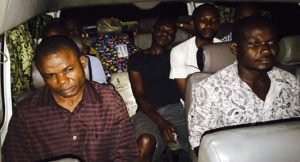 In its ongoing efforts to rid the Niger Delta region of all forms of criminality, troops of the Joint Task Force code named “Operation Delta Safe” have apprehended fourty-four suspected members of the proscribed Indigenous People of Biafra (IPOB) in Bayelsa State.

This was revealed in a statement by Lieutenant Colonel Olaolu Daudu, the Coordinator of the Joint Media Campaign Centre. According to him, the mass arrests was made possible based on intelligence reports received by the troops.

He stated that the troops trailed a group of people which led to the arrest of the 44 persons at Lakeview Club along Mabinton Estate, Okaka road in Yenagoa.

He alleged that the group was planning to establish a chapter of the banned IPOB group in the state to cause chaos and disrupt public peace.