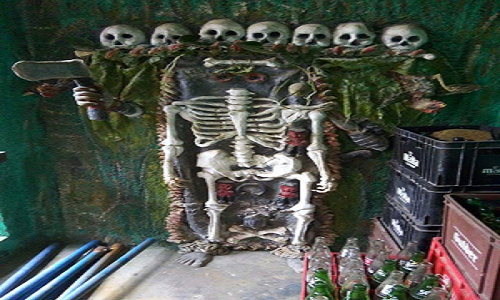 Troops of the Joint Task Force codenamed Operation Delta Safe (ODS) were greeted with shock and disbelief recently when they discovered 25 human skulls at various stages of decomposition and a full human skeletal remains at four shrines operated by suspected militants deep inside the creeks of Akpabuyo and Bakassi local government areas, Cross River State.

The discovery, it was learnt, raised concerns that the militants were engaged in human sacrifice.

The shrines, which were discovered at Ikot Ene Idam. Abakpa and Ikang creeks, belonged to the Bakassi Strike Force (BSF).

The troops, who raided the area, acted on a tip off.

He said: “During the cordon and search operations, the troops discovered 25 human skulls in various stages of decomposition, a complete human skeleton and several other human body parts. 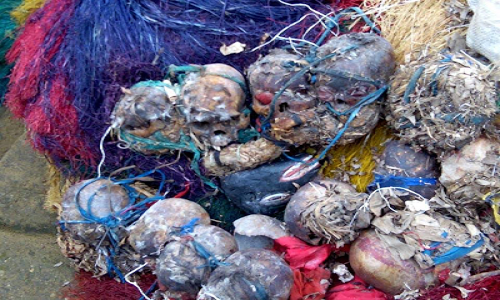 “The shrines were destroyed as troops continued to search for the perpetrators of these heinous acts against humanity”.

Mr. Otuji added that with the clearance operation, the BSF has been effectively “smoked out” from its strongholds.

“It should be noted that the senseless killing of humans for ritual purposes is sacrilegious and will not be tolerated in any form within the Joint Operation Area”, he stated.

He said upon interrogation, the suspects were discovered to be spies for BSF militants.

Meanwhile, troops of Sector 2 operating in Bayelsa State arrested 44 members of the proscribed Indigenous People of Biafra (IPOB) at a club along Mabinton Estate, Okaka, Yenagoa.

According to Otuji, those arrested were planning to establish a state chapter of the banned IPOB to disrupt the public peace.

“They were duly arrested and handed over to relevant authorities for further investigations. The unity of Nigeria is not negotiable and sacrosanct.

“Hence, any unlawful gathering that will cause mayhem, threaten the unity and sovereignty of the country will not be condone”, he said.

Otuji noted that in Rivers State, troops of Sector 3 raided the den of cultists in Finima, Bonny following a distress call that the hoodlums were terrorizing the community with AK47 rifles.

He said the kingpin of the cultists identified as Eagle Face, on sighting the troops, dived into the water, adding that two days after his lifeless body was seen by the locals floating in the creeks.

He pointed out that the locals retrieved the body and buried it at Bonny River bank.

However, two of the suspected cult members were arrested with one locally made pistol, a machete and two handsets.