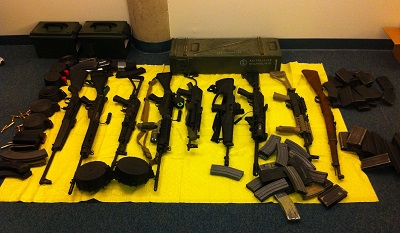 The Nigerian Army said it recovered a large cache of ammunition from the Gbishe hideout of Benue state’s most wanted gang leader, Terwase Akwaza, in the ongoing ‘Operation Capture Ghana’.

A carton full of explosives, two mini rocket launchers, assorted weapons and a power bike were among the items recovered.

The seized weapons and other military hardware and uniform, were displayed before newsmen at the Government House by the Joint Security Taskforce.

Governor Samuel Ortom who expressed worry over the collection of weapons recovered vowed to crush the Ghana-led gang.

He wondered why a civilian would be in possession of such high end security weapons and explosives as he concluded that Terwase Akwaza (also known as Ghana) and his gang must have been planning terror attacks in the state.