The presidential nominee of the Republican party Donald Trump has vowed to jail his rival Hilary Clinton of the Democratic party if he is elected President of the US as he slammed her for operating a private email server when serving as US Secretary of State.

Trump also added that he would appoint a special prosecutor to look into his Clinton’s email use because she had endangered national security during her tenure as President Barack Obama’s chief diplomat from 2009-2013. 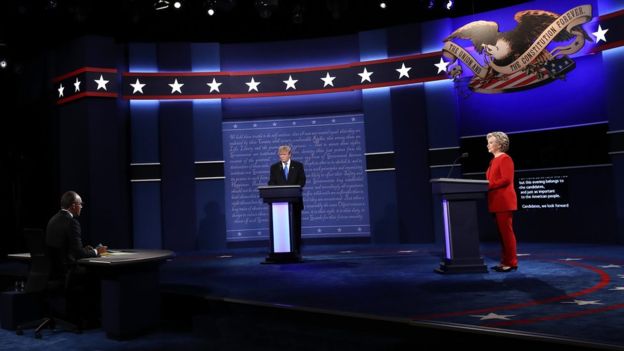 The engagement between two presidential runners quickly turned into an acrimonious discussion of a 2005 video that emerged on Friday in which Trump was heard using vulgar language and talking about groping women without consent.

Trump, however, said he was embarrassed by the video but dismissed it as “locker room talk.”

Trump then attacked Hilary’s husband, Bill Clinton, for his treatment of women, insisting that the former President had done worse to women.

“He has said the video doesn’t represent who he is but I think it’s clear to anyone who heard it that it represents exactly who he is,” Clinton said.

In regards to the use of a private email while serving as Secretary of State, Clinton admitted that was a mistake and took responsibility for it.

“For using a personal e-mail account. Obviously, if I were to do it over again, I would not. I’m not making any excuses. It was a mistake,” she stated.