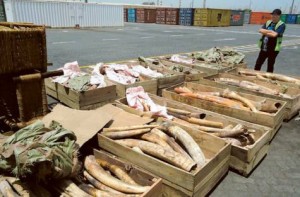 Associated Press reported a customs official saying the tusks were seized at Vietnam’s Hanoi airport on Saturday. She said the cargo had been declared as glass. She spoke on condition of anonymity because she was not authorised to speak to the media.

TRAFFIC, a wildlife trade monitoring network, said in a statement Sunday that illegal trade in ivory continues to be a major threat to the survival of elephant populations in Africa.

It said, “Traffickers continue to move ivory into and through Vietnam, and this seizure highlights the country’s role in the illegal ivory trade.“

Elephant tusks are used as jewellery and home decorations in Vietnam, which bans hunting of its dwindling population of elephants.