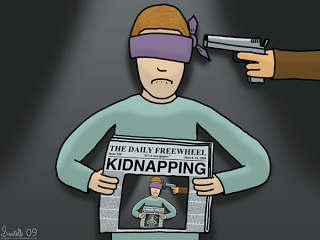 According to reports, she was rescued after her abductors stormed her husbands private clinic and bundled her into a Kia jeep belonging to her, only for vigilantes to arrive on time and stopped her abduction, arresting one of the suspects while two others escaped.

One of the vigilante who spoke in anonymity said, apprehending of the suspect identified as Innocent Egbogboh, 21, was made possible by the assistance of a commercial motorcycle operator who was hired by the suspect and his accomplice to transport them to the clinic.

“Having overheard their conversation, the Okada rider immediately alerted the vigilante in the area of the suspected plot of the hoodlums.

“We swooped into action by sealing up the entire area including the clinic. On sighting us while driving away with the victim, they tried escaping. Fortunately for us, we were able to apprehend one of them while his accomplices escaped,” the vigilante said.

A senior Police Officer attached to to the  Ughelli ‘A’ Division, confirmed the incident as he said the suspect is currently in our custody undergoing investigation after which he would be charged to court as required.