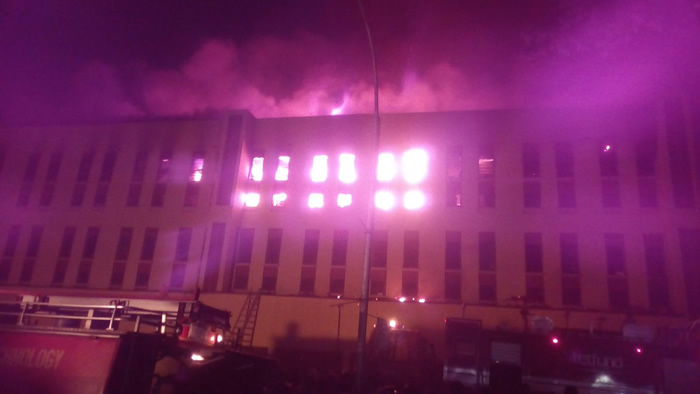 Sixteen students were injured yesterday  when fire swept through the Bakassi Female Hostel at the Yaba College of Technology, Yabatech, Lagos State.

The inferno, some students said, started around 5am from a wing of the top floor of the hostel when the generator was switched on following power outage.

Others said it was caused by a power surge from the ground floor of the two storey building where computer monitors and Computer Processing Unit (CPU) are stored. It escalated to the second floor of the building.

Another eyewitness said the electric pole connected to the hostel sparked many times before the fire started.

The sparks have been recurring, some students said, blaming it on what they called deterioration in the hostel connection.

Some groups, Man o War, and Red Cross, it was learnt, battled to contain the fire.

The students including an asthmatic patient, who fainted were rushed to the Military Hospital, Federal Medical Centre (FMC), Yaba and General Hospital on  Randle Avenue Surulere.

Some students claimed that the inefficiency of the fire service and the school management led to the heavy loss of properties.

Jessica Uzomechine, a National Diploma (ND) 1 student, said nothing was done to combat the fire until around two hours after it started.

She said fire fighting vehicles got to the school in time but had no water.

“I wonder what they came here to do without water. Only if they had water, my room and some other rooms would have been saved from the disaster,” she said.

“I was sleeping when I heard noise around 5am. Initially, I heard it was a fight but when I got to know it was fire, I found my way out of the hostel. My credentials, phones, laptop, books and everything I have in the hostel are burnt. Since I have life, I know there is hope,” she noted.

She said one of her friends fainted and was rushed to the medical centre.

Another student who gave her name simply as Chioma said: “I came back in the evening, laid on my bed, charged my phone and slept. Only for me to hear shouts of fire! Fire! I even thought they were joking because Bakassi girls like joking a lot. I came out and I saw smoke. I didn’t even know what happened, I just saw myself outside; others were stepped on during stampede. Some people’s heads were on the floor.

“The funniest part was that the porters locked the door and left the place. They ran off. I saw one of them carrying his cloth and running to the gate. Now if you want to enter, they are asking for pass.

“What is painful is that I lost my credentials: WAEC Certificate, Testimonial, LASU results, everything about my academics, my clothes, shoes, my phone, laptop. This is not the first time the electric pole will spark.”

“Two fire service vehicles came to the hostel but had no water to quench the fire until around 7am.”

The school’s Head of Department of the Fire Service, Dr Ismail Badmus, said no life was lost, adding that some students were injured and taken to hospitals.

“The incident happened at Bakassi Female hostel which is a two-wing two-storey building. It was the top floor of one of the two wings of the hostel.

“There was no life lost, but there were some injuries.

“We lost a lot of students’ items like laptops, phones, books and mattresses. You know it is a residential hostel; many combustibles are there, which readily catch fire,’’ Ismail told the News Agency of Nigeria (NAN).

The college had suspended academic activities till further notice following the fire.

The Rector, Dr Margaret Ladipo, called for calm, promising that the management would soothe victims’ pains.

“Sequel to the unfortunate fire at the Bakassi hostel early this (yesterday) morning, the management has suspended all academic activities till further notice.

“By this notice, all examinations and lectures, especially scheduled for today, have been put on hold while the college attends to the exigency.

“The management regrets the misguided and outright falsehood on the social media and calls to certain radio stations that there was no water on campus to put out the fire,’’ Ladipo said in a statement issued by Mr Charles Oni, Head of Public Relations Unit.

LASEMA General Manager Adesina Tiamiyu said they received a distress call around 5am and immediately swing into action.

He said the fire which had consumed the building was put out by the agency in collaboration with other emergency bodies, such as, the National Emergency Management Agency (NEMA), Lagos Fire Service, and the University of Lagos (Unilag) Fire Service officials.

Tiamiyu said: “We got a call that there was fire at Bakassi Hall. We got the information a little after 5am and we responded immediately. By the time our men got here, they were already doing the best they can do so we assisted them.

“When we got here, about 20 rooms were engulfed in fire so we had to calm the fire first for people to gain access. Property was damaged obviously but there is no death; maybe one or two fainted and they were revived.”