A powerful earthquake has hit Chile — in the same location an 8.3 magnitude quake struck last year. 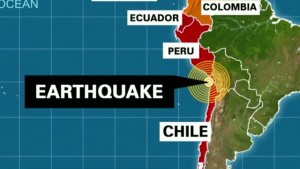 The 6.3 magnitude earthquake rocked the capital city, Santiago, and there have been reports of telephone lines are not working following the tremor.

No injuries or deaths have been reported.

The navy have said the earthquake is unlikely to generate a tsunami off the coastline.

A witness in Santiago said: “It started slowly but became stronger, then decreased in intensity again. It was fairly long.”

Tremors have also been reported to have been felt in neighbouring Argentina.

Chile’s emergency office Onemi called it a “major” seismic event which hit 41 miles from nearby city Talca at a depth of 72.1 miles.

Chile is a country which is susceptible to earthquakes.

A monster quake struck in a similar area in last year and sparked a tsunami warning.