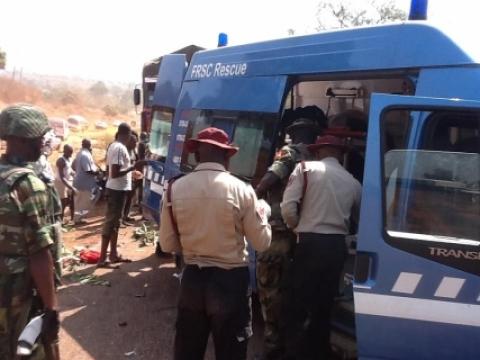 Eight staff of Yobe College of Education, Gashua, died on Saturday in a motor accident along Bayamari-Dapchi federal highway, the News Agency of Nigeria, NAN, reports.

NAN gathered that the eight non-academic staff, including the driver, were travelling from Gashua to Damaturu in the college bus to attend a promotion examination.

The survivors of the accident said the vehicle had a burst tyre, which forced it to somersault several times, thereby killing eight people while five others sustained injuries.

The provost of the college, Muhammad Gishiwari, who confirmed the accident, said it was a huge loss to the college.

Meanwhile, Governor Ibrahim Gaidam of Yobe has described the death of the staff as a great loss to the state, their families and the country.

Mr. Gaidam prayed for the repose of the departed souls and a quick recovery for the injured people.