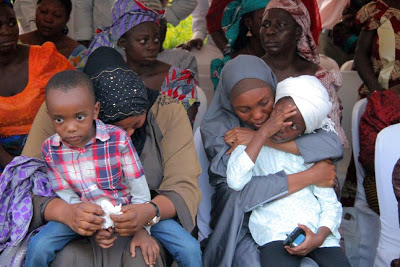 The wife of the President, Aisha Buhari, has condoled with the families of late Lt.-Col. Mohammad Abu-Ali and six others, who died in counter-insurgency operations in Borno State.

Mrs. Buhari offered her condolences to the families during the burial of the soldiers on Monday at the Military Cemetery in Abuja.

The wife of the President, who was among top dignitaries that attended the burial, also interacted with the families of the slain soldiers.

According to her, the soldiers died as heroes and would remain in her mind and the minds of Nigerians.

Mrs. Aisha Buhari commended the efforts of Lt.-Col. Abu-Ali and his colleagues for the successful return of some of the Chibok girls and other persons held in captivity by the insurgents.

She prayed for the repose of the slain soldiers’ souls, saying that late Lt.-Col. Abu-Ali, who was Commanding Officer of the 272 Special Task Force Battalion and his colleagues, paid the supreme price.

Also in her entourage were the wives of Borno, Kebbi and Kogi State governors, Nana Shettima, Zainab Bagudu and Rashidat Bello respectively, as well as wives of some ministers.

The families of the slain soldiers were later presented with the National Gorail for fallen heroes by the President and Commander-in-Chief of the Armed Forces of the Federal Republic of Nigeria.

The presentation was performed by the Chief of Staff to the President, Abba Kyari, who represented the President at the burial ceremony.