Nobel Laureate, Wole Soyinka, has vowed to destroy his green card if Republican nominee Donald Trump emerges the winner of the US presidential election.

Soyinka said this in Good Evening Ghana during an interview with Paul Adom-Otchere, a Ghanaian journalist, on Friday (October 28).

When asked about his reading of the American politics presently, the professor expressed his opinion by recalling the event of former Nigerian president Olusegun Obasanjo ripping his PDP membership card in public.

Soyinka said, “I have a green card. The day Donald Trump becomes president of America, I will call a press conference and cut that card to pieces, and they will never see me in America again“.

“Because I shudder to thin what America will become..”

The 82-year-old accused Trump of having a “mindset which pushes everybody out” and also called him ”dangerous” saying he wants to turn back the hands of the clock at a time humanity was trying to heal some of the global crimes of the past.

The Guardian UK also reported Wole Soyinka to have expressed the same opinion while giving a speech to students of Oxford University, England.

He said, “If in the unlikely event he does win, the first thing he’ll do is to say [that] all green-card holders must reapply to come back into the US. Well, I’m not waiting for that.

“The moment they announce his victory, I will cut my green card myself and start packing up,” said Soyinka, who is scholar-in-residence at New York University’s Institute of African American Affairs. 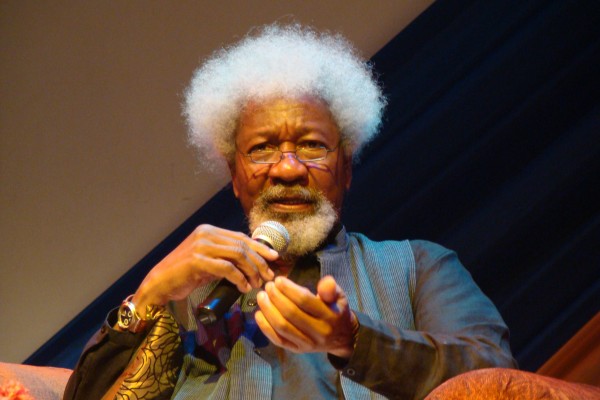 The internationally-acclaimed playwright and poet described Britain’s decision to exit the European Union as a “ridiculous decision”.

He said, “What is happening in Europe shouldn’t surprise any of us … It has happened before. We were here when Enoch Powell was leading his thugs out to drive blacks from here.

“It’s a constant fight to try to get a nation to recognise its own noble persuasions, its own persuasions of the loftiness of human possibility. It’s for young people like you to say no to them whenever that happens.”

Wole Soyinka also informed the students that the torch of African literature is being carried by the younger generation.

“I think we of the older are getting a little bit tired, and I think our production gets thinner and thinner. But fortunately, it doesn’t worry any of us, as far as I know, because the body of literature that is coming out [is] varied and liberated.

“African literature suffered from some kind of ideological spasm in which the younger generation was bombarded by a sense of ideological duty, in other words it was bombarded with a very simplistic notion by leftist radical writers, very reformative revolutionary thinkers, that all literature is ideological and therefore writers must ensure that their writing illustrates progressive ideologies.”