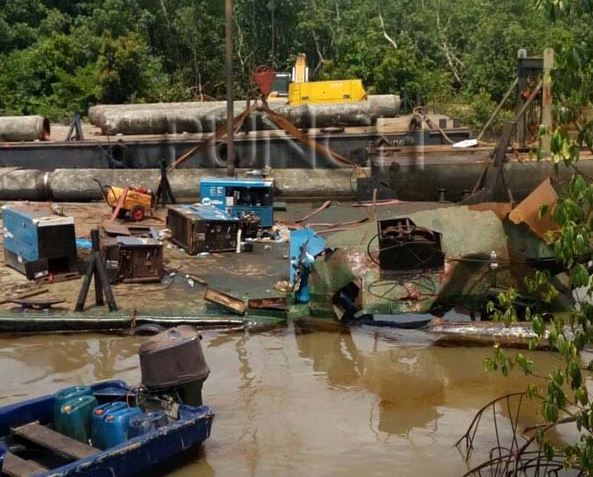 Just weeks ago, Nigeria’s junior oil minister said output was almost back to normal after a year of devastating attacks against the major African oil producer.

But now it seems Emmanuel Kachikwu spoke way too soon about the 2.1 million barrel per day figure.

Hours after President Muhammadu Buhari held talks with representatives from the oil-producing Niger delta in the capital Abuja on November 1, the attacks resumed in spectacular fashion.

A blast on the Trans-Forcado pipeline just 48 hours after it reopened was a brazen provocation, casting doubt on the Nigerian government’s ability to secure peace in the region.

Then on November 5, the major pipeline was hit again by the Niger Delta Greenland Justice Mandate, a group that has stepped up its attacks in recent months.

In the middle of the month, the Niger Delta Avengers, the main group in the restive region, claimed to have bombed three Nembe creek trunk lines.

The Avengers said the ongoing sabotage was in response to the Nigerian navy’s “Operation Sharkbite” in the region aimed at stopping attacks by militants and pirates.

“We are determined to continue this war by all means necessary,” the Avengers said.

The Nigerian army launched “Operation Crocodile Smile” in the oil hub of Warri earlier this year in an attempt to stop the pipeline sabotage hammering the economy.

But regional leaders say that the presence of the troops is stoking tension in a frustrated region, caught between violent militants and heavy-handed soldiers.

Last week, Nigerian newspaper Premium Times said that soldiers had killed a kidnapped pastor in August mistaking him for a militant.

Fed up with the violence, women have started protesting.

“Only some days back, they (soldiers) invaded Oporoza community with two gunboats,” Godspower Gbenekama from Gbaramatu community, near Warri, told AFP.

“Angered by the constant invasion, women from the community mobilised in protest, met the soldiers and told them that they were tired of their frequent invasion of their community.”

There is a deep-rooted distrust of President Buhari, a northerner, in an impoverished region where people are cynical about politicians after years of broken promises.

Some feel they are being punished after not voting for Buhari’s ruling All Progressive Congress (APC) party in 2015.

“There is no desire to achieve anything through the deceit called peace talks,” Niger delta activist Annkio Briggs told AFP.

“The Niger delta not voting for APC in 2015 was unforgivable and the people are being punished today.”

Others feel that Buhari’s pledge to create a $10 billion Niger delta infrastructure fund is nearly impossible to achieve given Nigeria’s economic crisis.

“I don’t think that they really feel a sense of trust in the government,” said Dolapo Oni, energy researcher at Ecobank.

“Unfortunately there’s not much that government can do, I think the disruptions will likely continue,” Oni said.

Charles Swabey, oil and gas analyst for BMI Research, echoed Oni, saying the attacks were pressure tactics that played havoc with production and showed the government the militants “have the capability to carry on.”

The wave of attacks began in early 2016, tipping the West African country into a recession in August.

Nigeria depends on oil for 70 percent of its government revenue and the bulk of its export earnings.

The militants want more energy wealth to go back to the communities it is taken from and are calling for more development and a clean-up of the polluted environment.