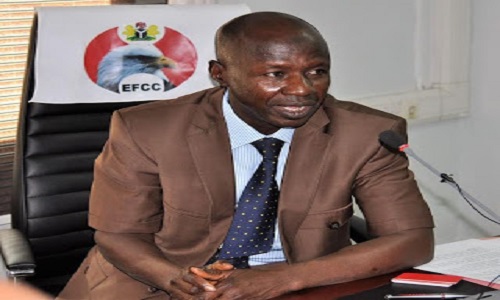 A coalition of anti-corruption groups have urged the Senate to expedite action on the confirmation of Ibrahim Magu, as substantive Chairman of the Economic and Financial Crimes Commission (EFCC).

President Muhammadu Buhari’s letter for Magu to be confirmed as EFCC Chairman, is presently before the Senate.

According to the groups, Magu’s confirmation will give the anti-corruption fight the much-needed boost to sustain the Buhari administration’s agenda to curtail impunity in governance.

Having a substantive chairman for EFCC will be in compliance with Article 6(2) of the UN Convention Against Corruption (UNCAC) of which Nigeria is a signatory, they added.

The groups, in a statement authorized by Debo Adeniran (Coalition Against Corrupt Leaders); Lanre Suraju (Civil Society Network Against Corruption); Adetokunbo Mumuni (Social-Economic Rights and Accountability Project); David Ugolor (Africa Network for Environment and Economic Justice); Okey Nwanguma (Network on Police Reform in Nigeria); Faith Nwadishi (Publish What You Pay) and Oluajo Babatunde (Centre for Transparency Advocacy), argued that the independence of the EFCC was under threat with each passing day that Magu’s confirmation is delayed by the Senate.

The groups said: “This delay by the Senate sends a wrong signal of deliberate attempt by the Senate to frustrate the anti-corruption fight or at best, exert political pressure on the EFCC and force it into some compromise with the Senate.

“Having reconvened from recess almost two months ago, the group therefore calls on the Senate to treat Mr. Magu’s confirmation as substantive executive chairman of the EFCC as a matter of top priority and of urgent national interest.

“We also call on President Buhari to use the ongoing second review mechanism of the United Nations Convention Against Corruption (UNCAC), which Nigeria is undergoing to send a strong message to the international community that Nigeria is genuinely committed to the fight against corruption”.

They said Magu is qualified to lead the anti-graft commission.

They said: “Section 2 of the EFCC Act says ‘there shall be a chairman who shall be the Chief Executive Officer of the commission, and who shall not be below the rank of an Assistant Commissioner of police. He is to be saddled with the responsibility of running the anti-crime commission.

“The groups verily believe that Mr. Magu, a Deputy Commissioner of Police, meets and exceeds this requirement, and therefore his confirmation as EFCC Chairman without further delay will give the anti-corruption fight the boost it needs to end the culture of impunity and systemic corruption in Nigeria”.

The groups also explained why the confirmation of Magu was necessary at this critical time.

“Fighting corruption without the basic guarantee of security of tenure for the head of anti-corruption agencies as has become the trend in the recent past in Nigeria is one of the major limitations of the fight against the scourge of corruption in Nigeria and the Senate of the Federal Republic of Nigeria has a duty to reverse this trend.

“Anything short of such a guarantee renders the fight against corruption ineffectual, susceptible to political manipulation and compromises the independence of the anti-corruption agencies”.

They said Magu deserves to be confirmed because he has changed the face of anti-graft war in the country.

The statement added: “The EFCC has of late stepped up the fight against acts of corruption and abuse of public trust as exemplified in the tracking of those remotely and directly connected with the misapplication of monies meant to fight Boko Haram insurgency.

“The commission has also ensured the confiscation of the properties suspected to have been acquired from proceeds of crime linked to politically-exposed persons as well as the investigation and prosecution of alleged owners.

“Lack of a substantive head with a secured tenure has been a major setback in all these efforts”.